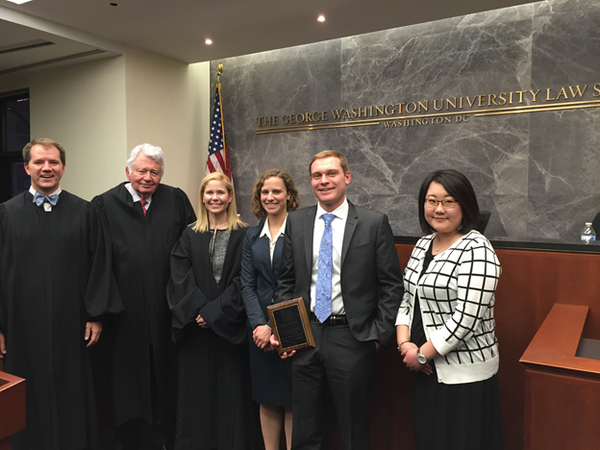 After four rounds of competition, NDLS students Sarah Gallo and Patrick Duffey (with Jae Kim on the brief) were declared the winners of the National Religious Freedom Moot Court Competition February 7.

A second NDLS team (Greg Chafuen, Allison Burke, and Kyle Ratliff) also competed. Both teams will square off against each other in the 59th Annual Moot Court Showcase in the Patrick F. McCartan Courtroom February 26.

The legal problem at issue in both competitions involves claims of conscience raised by teachers against a hypothetical law in Washington, D.C., that requires teachers and administrators to carry firearms on public school property during school hours.

Professor Venter, the law school’s Legal Writing Program director and moot court advisor, noted that students interested in the moot court program can participate in try-outs in the spring of their 1L year. Students who are admitted to the program are then eligible to compete for a place on one of the competition teams.

In addition to selecting the teams for the annual Religious Freedom competition, the NDLS Moot Court Board sends two teams to the ABA National Appellate Advocacy Moot Court Competition. It also selects four third-year students to write briefs and conduct oral arguments in appointed cases before the United States Court of Appeals for the Seventh Circuit under the supervision of Adjunct Professor Robert Palmer, a leading appellate practitioner.