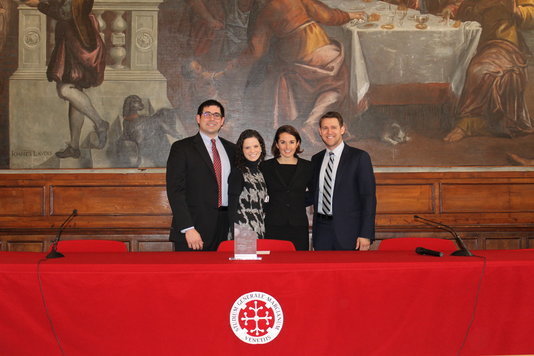 According to organizers, the competition brought together seven teams of law students from the United States and Europe to argue a case on religious accommodation, examining issues of religious freedom through a comparative lens.

“The relationship between law and religion, a nuanced issue even when confined to the legal theory within the United States, explodes in complexity when viewed in light of international legal systems and policy concerns,” 2L Dines said. “Competing in the competition and representing Notre Dame Law School in Italy was thrilling.”

Students came from national and international law schools around the world and participated as teams to deal with a case concerning the complex relationship between law and religion.

Representatives of Fondazione Marcianum said the initiative intends to bring together scholars and students of different backgrounds to address the very same case from two different standpoints. Some scholars act as judges of the Supreme Court of the United States and others as judges of the European Court of Human Rights. Teams argue the same fact pattern before one of the two boards of judges. After the final judgment, the scholars and students participate in roundtable discussions, debating the case and the way it was addressed before the different courts.

“This experience enhanced my personal academic experience because I was able to use my classroom knowledge in a practical way,” said Ciulla. “I was able to write a legal brief for a client and frame the issues in a manner benefiting my client. Further, the experience of coaching the two oralist team members allowed me to fully grasp the intricacies of our arguments and hone my oral advocacy skills.”

In addition to testing their advocacy skills, participants of the competition were also able to compare the different cultural points of view of the two courts.

“The ability to learn the ways that one law can be analyzed differently in the U. S. Supreme Court versus the European Court of Human Rights allowed me to learn the intricacies of the two systems,” said Shakour. “The entire competition was a rewarding educational and professional experience.”