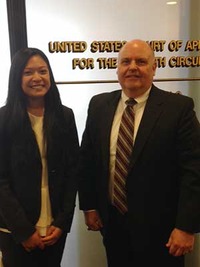 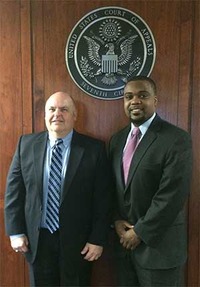 Each year several third-year students on the NDLS Moot Court Board write briefs and conduct oral arguments in appointed cases before the United States Court of Appeals for the Seventh Circuit.

The experience is made possible by the NDLS Seventh Circuit Practice Externship, in which the participants typically write the Appellant’s Brief and Appellant’s Reply Brief in the fall semester and argue their cases in the spring under the supervision of Adjunct Professor Robert Palmer, a leading appellate practitioner.

The students are chosen during their second year through the Moot Court Board’s internal competition.

“Presenting oral argument to the Seventh Circuit Court of Appeals is a rare and prestigious opportunity for a law student,” said Prof. Palmer, “but our students do very well and I have received very positive feedback from the court over the past 24 years. Although the days leading up to the argument can be nerve-wracking, students remember the oral argument itself as a positive experience for the rest of their careers.”

This year, 3L Christine De Leon argued a prisoner habeas corpus case before the Seventh Circuit on April 17. Judges Manion, Sykes, and Tinder heard the appeal in the case of Ford v. Wilson. The issue before the court was whether the prosecutor’s comments to the jury about Mr. Ford’s choice not to testify at his criminal trial violated his Fifth Amendment rights. To listen to the official recording of De Leon’s oral argument, click here.

The following day, 3L Bryce Rucker argued another prisoner habeas corpus. Judges Easterbrook, Hamilton, and Bauer heard the appeal in the case of Avila v. Richardson. Bryce argued that Mr. Avila’s prior counsel provided ineffective assistance in not fully counseling Mr. Avila about the implications of his plea deal. To listen to the Seventh Circuit’s recording of Rucker’s oral argument, click here.

In a few weeks, a third NDLS student, Brian Wright-Bushman, will also argue before the court.