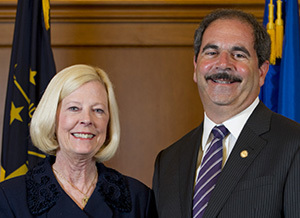 Notre Dame Law School is thankful to Frank Julian (’82 J.D.) and his wife Carol for their continued support of the Frank G. Julian Law Fellowship and their dedication to law students.

“My experience at Notre Dame Law School was one of the greatest of my life. I fell in love with not only the people, but with the institution itself. My law school classmates are some of my closest friends, and I continue close relationships with many faculty members,” said Julian.

Julian’s service to NDLS is best exemplified through his time and regard for the law school’s current students, faculty, and administration. Since 1992, Julian has been a member of the Order of St. Thomas More. He has been a member of the Notre Dame Law Association’s Board of Directors since 2003, serving a one-year term as president in 2007. The University’s President appointed Julian to the Notre Dame Law School Advisory Council in 2012.

“These boards give me a great opportunity to work with students,” said Julian. “It is very rewarding to not only be able to provide a source of financial aid to our students, but also to act as a sounding board to students in making employment and career decisions. It has also enabled me to appreciate the dedication of our law faculty and administration.”

His dedication to Notre Dame does not stop at the doors of the law school. Since his days as a student in the early 1980s, Julian has missed only six Fighting Irish home football games—quite a feat considering he and his wife Carol reside in Cincinnati, Ohio, where Julian works as Vice President Legislative Affairs and Tax Counsel at Macy’s, Inc.