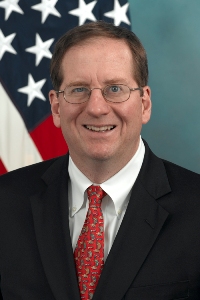 Former Presidents George W. Bush and Barack Obama both called for the closure of the Guantanamo Bay detention facility during their administrations, saying the costs of keeping the facility open outweighed the benefits, Paul Lewis, ’80, ’83 J.D., told students and faculty Wednesday at Notre Dame Law School. He said he hoped President Donald Trump would agree.

Lewis was the Department of Defense special envoy for closing the Guantanamo Bay detention facility under the Obama administration and previously served as chief counsel to the House Armed Services Committee.

“Since 9/11, both political sides have wanted to balance and protect the liberty and security of the United States, while keeping our values and promoting due process, and doing what the international community respects,” Lewis said.

There were many reasons that the Obama administration tried to close Guantanamo.

One reason is the facility is expensive. Cost estimates are as high as $10 million per year per detainee, according to some estimates, Lewis said.

Obama had said that closing Guantanamo was a national-security imperative because the facility drained resources, was used as a terrorist recruiting tool, and damaged the United States’ relationship with key allies.

“In addition, Guantanamo appears to some to counter our values,” Lewis said.

The Guantanamo Periodic Review Board – which includes senior officials from the Department of Defense, Department of Justice, Department of State, Homeland Security, and the Joint Chiefs of Staff – determines whether detainees represent a continued threat to the nation’s security, Lewis said.

The goal during the Bush and Obama administrations was to transfer as many eligible detainees as possible. Almost 700 detainees have been transferred since the facility opened. There are 41 remaining, and five have been recommended for transfer.

Critics of closing the facility, along with the Trump administration, have concerns moving forward, Lewis said. Closing Guantanamo, they say, poses other risks. One major concern is where to move detainees to facilities in the United States, he said.

There is also concern about the percentage of detainees who re-engage in terrorism and “would go back to the fight,” Lewis said.

It is too soon to tell what Trump will do about Guantanamo Bay. Lewis said he hoped the new president would reach the same conclusion as the two previous administrations when he looks at the facts and intelligence.

“If we use force as a nation, we have to detain people. Everyone understands that,” Lewis said. “The issue is whether they should be detained at Guantanamo. I am hopeful, after time, the president will realize that it is not the place and that it hurts us.

“Even if he takes people into Guantanamo, I hope he sees that Guantanamo is not a one-way street,” Lewis continued. “We transferred people under Presidents Bush and Obama. I am urging President Trump to do the same and keep the transfer process open.”