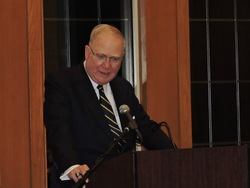 On Friday, November 14, 2014, the NDLA presented the Fr. Michael McCafferty Award to the Honorable Kenneth Ripple for his thirty-seven years of distinguished service to the University of Notre Dame as a faculty member of the Law School. The award was presented by Dean Nell Newton and NDLA Board President, Jared des Rosiers, at a dinner following the NDLA fall board meeting. This award is named for Fr. Michael McCafferty, who in his all-too-brief life established a universal reputation within Notre Dame Law School as a charismatic teacher, renowned scholar, beloved friend and spiritual mentor. 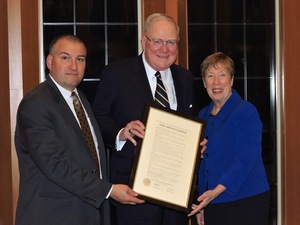 For the past thirty-seven years, Judge Ripple has had an indelible impact upon the generations of Notre Dame Law students whom he has taught in the areas of constitutional law, federal courts, judicial process, and conflicts of laws. When he joined the Law School faculty, he quickly became a favorite and revered teacher. The beloved professor was voted Teacher of the Year by Notre Dame law students on five separate occasions in 1978, 1979, 1980, 1984, and 1985.

Since his 1985 appointment by President Reagan to the United States Court of Appeals for the Seventh Circuit, Judge Ripple also has served with great distinction on the federal judiciary — a judiciary which Judge Ripple has proudly described as “indeed a rare flower of human achievement.” The “Almanac of the Federal Judiciary” includes the following remarks from the lawyers who have appeared before him in the Seventh Circuit:

While serving on the bench, Judge Ripple continued to be a proud advocate of Notre Dame, as over the years he has quite remarkably hired twenty-four judicial clerks who are graduates of Notre Dame. A number of these clerks traveled back to Notre Dame to join Judge Ripple as he received the award.

Despite the demanding rigors of serving on the Seventh Circuit, Judge Ripple has remained steadfastly committed to his belief that teaching is part of a judge’s responsibility. In one of his many law review articles, Judge Ripple offered this perspective:

“By teaching, I am continuing a tradition as old as the Republic. Federal judges long have considered the education of the newest members of the profession as a special responsibility. At Notre Dame, where the tradition of cura personalis – development of the whole individual – remains the animating philosophy of higher education, the rewards of teaching are remarkably great.”

“Today is ‘sail away’ day. You begin a voyage that will last for decades. Along the way, you will work very hard, discover strengths and interests you never knew you had, make contributions you never thought possible, and experience a degree of satisfaction of which you never dreamed. Throughout your voyage, I wish you a fair winds and a following sea. And when your ship finally reaches its home port, may you say with the psalmist: “I have loved Thy law.”

Judge Ripple and his wife of forty-six years, Mary, live in South Bend and have raised three sons of Notre Dame who are each lawyers: Gregory, ND ’94, ‘03L; Raymond, ND ‘01L; and Christopher, ND ’01.