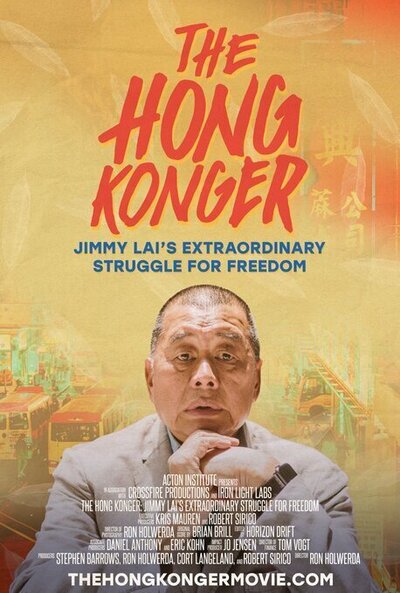 On December 6, Notre Dame Law School’s Religious Liberty Initiative hosted a screening of award-winning documentary The Hong Konger: Jimmy Lai's Extraordinary Struggle for Freedom, the newest feature from the Acton Institute. The documentary follows imprisoned media tycoon and pro-democracy activist Jimmy Lai and his long-term engagement in political activism on behalf of all Hong Kongers. The film sends a powerful and important message about the diligent and persistent actions that Lai and his fellow Hong Kongers have taken to preserve liberty and fight tyranny in response to China’s predatory actions toward Hong Kong.

Eric Kohn, the associate producer of the documentary, delivered opening remarks on the Acton Institute’s deeply personal motivations to shoot the film. “For everything you do in life, there’s a good reason and a real reason,” he said. “Courage is the testing point.”

Kohn serves as the director of marketing and communications at the Acton Institute. Through this role, he seeks to share with a wider audience Acton’s vision of a free and virtuous society, characterized by liberty and sustained by religious principles.

Before the screening, a Hong Kong-based human rights expert and lawyer noted at the event that Lai has slim chances of winning the Hong Kong government’s national security law case against him. Nonetheless, the film is important in showing that people outside of Hong Kong stand with the persecuted and have not forgotten their plight.

“His cause is our cause. His fight is our fight — the fight for the human freedom we are all, each and every one of us everywhere on this earth, endowed with by our Creator,” Kohn wrote in a tweet about Lai.

The documentary begins with Lai’s move from Canton (Guangzhou), China, to Hong Kong when he was 12 years old. He began working as a child laborer in a garment factory in Hong Kong while learning English and eventually worked his way up to become a prominent businessman and media executive. His entrepreneurial spirit and propensity to take risks propelled him to establish Giordano, an Asian clothing retailer; Next Digital (formerly Next Media), a Hong Kong-listed media company; and Apple Daily, the now-defunct popular pro-democracy newspaper. Despite having the opportunity to retire and leave Hong Kong after the city’s handover to China in 1997, Lai decided to remain there and committed his life to fighting for democracy in Hong Kong.

Prior to Hong Kong’s handover from Britain to China, Hong Kong was promised autonomy for 50 years after 1997. The guarantee of its freedoms encompassed the city’s social and economic systems, as well as its lifestyle remaining unchanged for the next 50 years following the handover. Under British rule, Hong Kong had developed an identity distinct from mainland China, setting the standard as an economic powerhouse.

“Hong Kong exemplifies Western values in a Chinese form. That is why it is viewed as an existential threat to China’s leadership,” said an interviewee in the film.

Unlike what was promised, China took control of Hong Kong’s political, economic, and cultural processes and, in many ways, aligned them with the processes in place during the regime of Mao Zedong. China’s attempts to silence Hong Kong’s outspoken media and cripple its once-vibrant civil society led to a slew of anti-extradition and pro-democracy protests, reaching their peak in 2019.

China responded to the widespread protests with a comprehensive crackdown that includes the imposition of the Hong Kong national security law that outlaws dissent. Enacted at the end of June 2020, the vaguely worded national security law punishes anything China considers to be acts of secession, terrorism, collusion, or subversion of state power.

More than 100 people, including Lai, have been charged with breaking the national security law, which carries up to life in prison.

More than 10,000 protesters were arrested, with approximately 2,500 convicted for various offenses.

In addition, most of the city’s prominent democracy leaders are now either in jail or have fled Hong Kong due to political persecution.

“Protest is a huge part of the DNA of Hong Kong,” the film said. An estimated 2 million people participated in the protests. While Lai insisted on peaceful protest, violence in the streets of Hong Kong gradually escalated, with police firing tear gas, pepper spray, and water cannons at protesters.

The Hong Kong government has repeatedly defended the national security law, claiming that it has restored order, stability, and prosperity to the city following the 2019 protests.

Apple Daily, Hong Kong’s only Chinese-language pro-democracy newspaper that Lai founded, was forced to shut down in June of last year. The newspaper served as a voice for freedom and democracy in Hong Kong.

“You cannot find a publication like Apple Daily, even in China,” commented one interviewee in the film. “There is a lot of disappointment and resentment in society because we cannot find a way to express ourselves, and the government is not listening.”

One particular scene in the film shows a long line of people rushing and queuing up at midnight to buy copies of the last edition of the newspaper. Caroline Flannery — an undergraduate student at the University of Notre Dame majoring in political science and history — shared that, for her, “The most impactful scene was when the people of Hong Kong were standing outside the Apple Daily headquarters in support of the pro-democracy paper. It showed that hope never dies.” Flannery continued, “I will keep this cause dear to my heart and vote for representatives that approve of pro-Hong Kong policies.”

“Different freedoms thrive together and die together. The Chinese Communist Party doesn’t tolerate the freedom to protest, to voice dissent, to publish an independent newspaper, to run in and win unfettered elections, to organize strikes and boycotts,” Victoria Tin-bor Hui said. Hui serves as an associate professor of political science at the University of Notre Dame and is one of the interviewees featured in the documentary.

In a separate conversation that took place with the Religious Liberty Initiative following the screening, Hui stated, “The Chinese Communist Party has also taken steps to silence and co-opt religious freedom. Church leaders who provided shelters and support to protesters and who criticized the draconian national security law have been persecuted, silenced, or forced into exile. Cardinal Zen is the most notable example. Churches that used to organize June 4 service to commemorate Tiananmen can no longer do so.”

Lai’s repeated arrests have drawn sharp criticism from prominent Christian leaders, Western governments, and international rights groups from across the world. He currently faces several charges of collusion with foreign countries under the national security law. Many have raised concerns over the harassment of Lai and have called for his release from prison.

Lai has cited his Catholic faith as providing a strong foundation for his activism and courageous fight for freedom: “If I go away, I not only give up my destiny, I give up God, I give up my religion, I give up what I believe in.”

For more information about hosting a screening of The Hong Konger, you can visit the Acton Institute’s official website for the movie.