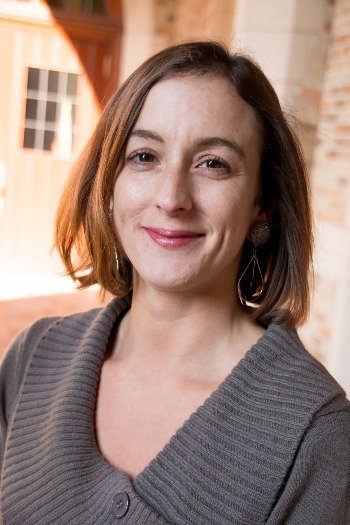 PSJD is the public service jobs directory initiative of the National Association for Law Placement. There are over 180 member schools and each could nominate two students. Gustin was one of eight finalists.

Gustin has been instrumental in reactivating the Exoneration Project at NDLS, a student-run organization that assists with investigating and petitioning courts to reverse wrongful convictions. Previously called the Innocence Project Club, the organization was revitalized earlier this year by Gustin and four other NDLS students.

The main reason Gustin is pursuing the Exoneration Project is that she feels it just needs to be done. “I am in a position to do this and get the ball rolling at NDLS,” she said.

Her interest in wrongful convictions actually started many years ago before she ever thought of attending law school.

“I started looking into wrongful conviction research and the flaws that are built into our judicial system,” Gustin said. “I became aware of the disproportionate incarceration rates of minorities, our overreliance on things like the accuracy of eyewitness testimony, and the unacceptably high number of wrongful convictions and arrests.”

Gustin came to NDLS on the footsteps of her mentor, Michael A. Bosco Jr., ’60 J.D., shareholder at Tiffany & Bosco, P.A. in Phoenix. After high school she was not sure what career path she wanted to pursue. She had many different jobs and eventually ended up working at Tiffany & Bosco.

“‘Mr. B’ really helped with my development while I was at the law firm. His influence, in addition to observing the other lawyers at the firm, helped confirm for me that I wanted to be a lawyer,” she said.

She chose ND because Bosco and other NDLS alums she met “spoke about Notre Dame Law School in a way that I do not hear other people speak about their law schools.”

At NDLS, Gustin saw an opportunity to pursue the calling she had held on to for so many years. She connected with other students who shared her concerns and they decided to restart the exoneration initiative at NDLS.

One of their first activities was to sponsor a talk by Keith Cooper, a local man who was wrongfully convicted of armed robbery and later pardoned by Indiana Gov. Eric Holcomb. Elliot Slosar of the Chicago-based civil-rights law firm Loevy & Loevy and the Exoneration Project at the University of Chicago Law School, was Cooper’s attorney and handled his post-conviction relief.

After the talk, Gustin met with Slosar and they created a partnership. The group now works under the supervision of Slosar and Notre Dame Law Professor Jimmy Gurulé and is taking on its first two cases.

“Erika is a natural-born leader with passion and commitment to justice. Under her leadership, the student Exoneration Project is seeking to correct the injustice served on individuals wrongfully convicted and punished by the American criminal justice system. The work of the Exoneration Project has real-life consequences,” Gurulé said.

Gustin credits 3L Tia Paulette, president of the Exoneration Project, and the other board members for their guidance and for being the glue that holds the group together.

“We are a cohesive unit, sharing responsibilities and making sure everyone’s heads stay above water,” she said. “This allows me the privilege of plunging into the deep end and pursuing our casework.”

Gustin says that the students have made this so easy. “If you build it, they will come,” she said.  “So many classmates have signed up to work on our first cases. It is a wonderful opportunity to do real casework while helping people and ultimately really realizing why we are at Notre Dame.”

Gustin is equally excited that NDLS is so supportive about the initiative.

“They support my long-term goal of eventually forming an Exoneration Clinic at ND,” Gustin said. “It may be a long process, but they don’t say it can’t happen, and are helping to guide us toward our goal.”

Gustin spent her 1L summer as a judicial extern at the Supreme Court of Hawai’i and worked on a task force to reform the state corrections center. She is returning to Hawai’i this summer to do commercial litigation for Carlsmith Ball LLP. She said she has chosen Hawai’i because the climate is accommodating, not just in weather, but for attorneys to pursue pro bono work.