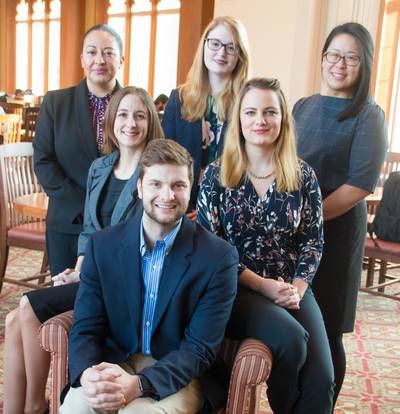 The idea came to Katelyn Ringrose a few years ago while she was working for a public school in Washington state.

Ringrose saw young immigrants who had escaped dangerous situations in their birth countries and were living in the United States without their parents.

And she saw a need to connect those young people with legal services in a better way.

The experience inspired Ringrose to go to law school, and it also inspired her to start Impowerus – an online platform that connects juvenile immigrants with pro bono attorneys offering immigration services.

“My students loved talking to their lawyers, but it was hard for them to get transportation,” Ringrose said. “All of my students had access to the Internet, so it made me think about the most effective way to connect them with legal services.”

Ringrose, now a 2L at Notre Dame Law School, founded Impowerus in September 2016 – not long after she arrived on Notre Dame’s campus.

Today, she and fellow Notre Dame 2L Erika Gustin are presenting Impowerus at South by Southwest in Student Startup Madness, a nationwide competition for student-led digital media startups. Only eight startups out of more than 200 applicants from across the United States were invited to the showcase in Austin, Texas, where Ringrose and Gustin will pitch Impowerus to a panel of entrepreneurs, venture capitalists, and investors.

Impowerus removes a barrier to legal representation. It offers a novel solution by providing a platform where attorneys and clients can communicate over the Internet through a secure video chat with the integration of a useful dashboard.

Ringrose said Impowerus will also be attractive to law firms. It will save lawyers time by enabling them to find pro bono clients quickly and easily. The Impowerus team is working on a price that firms would pay to use the service, which could follow a subscription model.

Ringrose arrived at Notre Dame with the idea for Impowerus, but building the idea into a business has been a collective effort.

Eight Notre Dame students are working on Impowerus, which has also garnered support from numerous organizations that exist to encourage entrepreneurship and startup companies at Notre Dame and in the greater South Bend region. Notre Dame Law alumnus Carlos Cisneros Vilchis, ’17 J.D., a staff attorney at the Community Activism Law Alliance in Chicago, is also assisting Impowerus with his knowledge of immigration law and business formation.

Among the current law students working on Impowerus is 3L Veronica Canton. Before coming to law school, Canton gained pro bono legal experience while working as a coordinator for clients and service providers at Reed Smith LLP in San Francisco.

She was born in El Salvador and immigrated to the United States when she was 9 years old, crossing the U.S.-Mexico border with a smuggler. Canton’s mother fled El Salvador because of the civil war there, and Canton followed to reunite with her in California.

“When we were in the process, my mom was working with nonprofit organizations. We had legal representation, and that made a big difference,” Canton said.

“Because I’m now a citizen, I’m able to talk about it more freely,” she added. “Women and children are vulnerable during upheaval. I want to connect people with similar resources that helped me through the process.”

In 2017, Impowerus won the Fellow Irish Social Hub, or FISH, award for best social venture at the Mendoza College of Business’s McCloskey Business Plan Competition. The team also received a grant from Notre Dame’s IDEA Center in the fall semester and continues to receive guidance from the center. Impowerus is in the 4-Cylinder phase of the IDEA Center’s Commercialization Engine process.

Notre Dame Law School’s Community Development Clinic and Intellectual Property & Entrepreneurship Clinic helped the Impowerus team transform the idea from a student project into a business. Students in Notre Dame’s ESTEEM program helped the group validate a need for the service within the legal market. Beyond campus, Impowerus has received assistance from South Bend Code School – a local company that teaches coding skills.

“This campus is really supportive of student ideas,” Ringrose said. “We’ve had a lot of doors opened for us. People have been very willing to reach out and ask what they can do.”