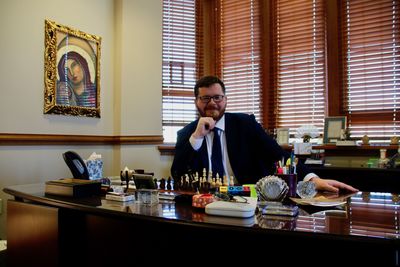 I am pleased to announce that Matthew Fitzgerald, 3L, was sworn in as Dean of Notre Dame Law School on April 27, 2018, and that he has agreed to serve in that important and august position until April 28, 2018.

During Dean Fitzgerald’s short – but surely memorable – deanship, I will return to my first love, teaching and research.

Dean Fitzgerald was chosen by the usual rigorous process – he was the highest bidder at the Father Mike Show. He brings other strengths to the position as well. He was honored to serve as the Moot Court Board’s 2017 Oralist Selection Chair, and in his 3L year competed on the Intellectual Property team that placed first in the regional round of the Saul Lefkowitz Moot Court Competition hosted by the International Trademark Association. He and his teammates then placed third at the national round of the competition.

Dean Fitzgerald will need to draw upon all that experience and more as he works his way through his deanship, and associate deans and senior administrators brief him on the pressing issues facing the Law School. I am counting on him to solve all of these problems during what I expect will be a short, but fulfilling, tenure as dean. 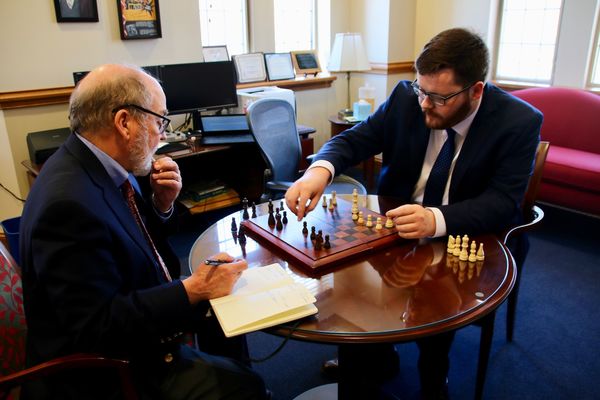 His itinerary includes meeting with concerned students to discuss workloads, planning for the Law School’s future, working on his term paper for Professor Mary Ellen O’Connell, and studying University regulations to look for a loophole that will permit him to remain dean forever.

Dean Fitzgerald has also advised that he has an open-door policy and will be happy to meet with anyone who happens to drop by his office in 2100 Eck before he returns to 3L status on April 28.

Although his deanship will be short, it is certain to provide experiences upon which he can draw after graduation when he joins the litigation department of the Buffalo, N.Y., firm of Phillips Lytle LLP.

In addition, he says, “This summer I will be studying for the New York Bar while staying in South Bend, and I am proud to say that I will be fulfilling the New York Pro Bono requirement by working on cases seeking to exonerate wrongfully convicted individuals. I encourage all 1Ls and 2Ls to consider donating some fraction of their time to a cause that calls to them. Making a real difference while in law school is what can make you a Different Kind of Lawyer.”

Please join me in welcoming Dean for the Day Matthew Fitzgerald.