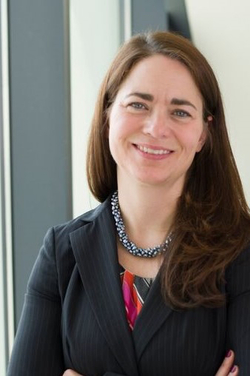 “The Law School fosters community as opposed to competition,” said Jennifer Klute Hall, ‘99 J.D. "There is still competition on some level, but it’s friendly competition – the recognition that if one of us does well, all of us do well."

Jennifer Klute Hall, ’99 J.D., has navigated the politics of Washington, D.C., drafted major legislation that won congressional approval, and now serves as general counsel at a national trade association for the trucking industry.

And when she looks back at her accomplishments, she sees a few of the lessons she learned at Notre Dame Law School as keys to her success.

“I think back to my first year at the Law School and a discussion with one of my professors about ethics. He said the big ethical dilemmas will not determine who you are. It’s the small moments – little moments where no one would know if you did the wrong thing – that define you,” she recalled.

“I think that emphasis on ethics has helped me in my career, because reputation is really important in Washington, D.C.,” she said. “If people know they can trust you, they will want to work with you.”

Hall, who earned her bachelor’s degree at the University of Arizona, said the family-like bond among Notre Dame Law students is another thing that sticks with her today.

“The Law School fosters community as opposed to competition,” she said. “Throughout my career, I’ve always tried to foster an atmosphere where everyone works together. There is still competition on some level, but it’s friendly competition – the recognition that if one of us does well, all of us do well.”

Hall joined the American Trucking Associations in September 2016 as general counsel and executive vice president for legal affairs. The association engages in litigation to protect the trucking industry’s interests in federal and state courts nationwide and monitors legal developments that affect the industry.

She previously spent more than a decade as a professional staff member at the House Transportation and Infrastructure Committee, most recently as general counsel and deputy staff director. Earlier in her career, she worked with the Federal Emergency Management Agency and the House Committee on Oversight and Government Reform.

In 2006, Hall drafted the Post-Katrina Emergency Management Reform Act, which corrected a shortcoming that became apparent in the wake of Hurricane Katrina by establishing a direct line of communication between FEMA’s head emergency manager and the president of the United States.

In 2011 and 2012, she was responsible for drafting portions of Moving Ahead for Progress in the 21st Century, which appropriated $105 billion over two fiscal years for transportation and included several reforms, such as streamlining the review process for highway projects.

Notre Dame alumni proved to be important connections when Hall went to Washington with the goal of working on Capitol Hill.

“When I came to D.C. and was looking for a job, I reached out to alumni who worked on the Hill. Almost every person I contacted agreed to meet with me and help me,” she said.

“I cannot give our alumni enough credit,” she said. “I hope I have done my share to repay that by meeting with alumni and mentoring Notre Dame students, because I am forever thankful for that assistance.”