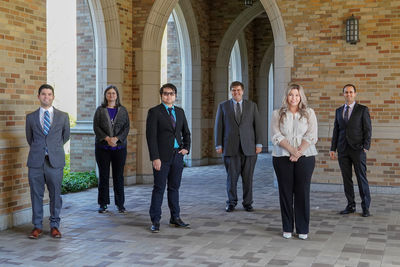 The competition requires teams to draft a patent application for an invention, which involves researching prior art, reviewing the client’s disclosure, drafting and re-drafting claims, and developing a specification.

“Numerous judges — all of whom are practicing patent attorneys and USPTO Examiners — remarked on how well everything was put together,” Potter said. “One judge commented the ‘presentation was excellent and the specification was a gem.’”

Work for the competition began at the end of the fall semester after finals were completed. This year’s long winter break, which was extended to 10 weeks, gave the team the opportunity to focus on the competition in detail, Lu said, though work did continue into the spring semester. The team drafted their application and then presented it to a panel of judges, where the students fielded questions regarding drafting decisions and defended their patent claim strategy. During the competition, Notre Dame Law’s team of first-year students went up against nine other schools in the Midwest regional division.

“I’m extremely impressed with the drive and passion of the Notre Dame students and very proud to have worked with them this year,” Professor Clifford said. “After a challenging fall semester, they opted to spend a large portion of their free time learning new skills and practicing for the competition.”

Potter said the team’s experience in this first year of competition helped build a foundation for success in the future.

“Many judges were shocked at the end to learn the team was entirely made up of 1L students,” Potter said. “Overall, I’m extremely proud of what the team members were able to accomplish, and hope that under Professor Clifford’s guidance, Notre Dame Law School will be able to continue building on this in the future.”