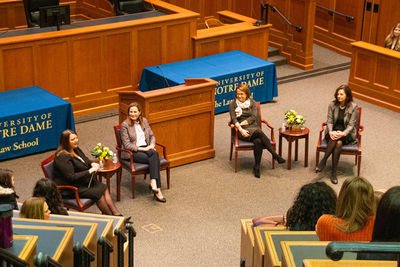 A century after American women gained the right to vote, women attorneys and judges have vivid memories of professional situations where they’ve found themselves the only woman in the room — and sometimes have been condescended to because of it.

Loretta Rush, chief justice of the Indiana Supreme Court and the first woman appointed to the state’s high court, said she’s been at social and professional gatherings where she’s been asked: “And whose wife are you?”

Rush made her comments during a January 24 event, “How Women Have Shaped the Judiciary,” a part of Notre Dame Law School’s commemoration of the centennial of the 19th Amendment, which granted American women the right to vote. A panel of women in the legal profession recalled numerous such experiences while clerking, practicing law and serving on the bench.

Read the rest of the article, "Sisters in Law" by Margaret Fosmoe '85, on Notre Dame Magazine's website.

The panel discussion was sponsored by Notre Dame Law School's chapter of the American Constitution Society and the Notre Dame Women's Legal Forum. A video of the full event is embedded below.