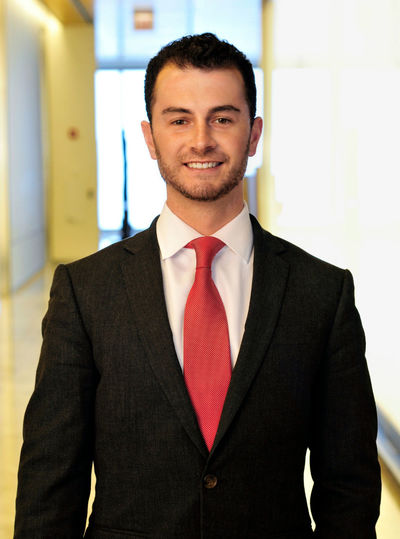 An Illinois man who asserted his innocence for more than two decades while serving a life sentence for a murder conviction was able to walk out of prison this spring.

And a Notre Dame Law School alumnus was among the lawyers who helped the man win his release.

Kevin J. Murphy, ’14 J.D., was part of a team from the Chicago-based law firm Jenner & Block that won a pro bono victory on behalf of Patrick Pursley, who had been incarcerated for over 23 years.

In March, Pursley was granted a new trial based on ballistics evidence that established – contrary to evidence presented at his original trial – that a gun recovered from his home did not fire bullets or cartridge cases found at the crime scene. A change in Illinois state law, which Pursley and other advocates lobbied to pass in 2007, enabled the court to consider the new ballistics evidence.

“With a few words, the conviction that had kept him in prison for 23 years was wiped away,” Murphy said. “It was great to be there to see the look on Patrick’s face, the look on his fiancée’s face, and to be a part of that moment.”

Pursley was released on bond in April and is awaiting a state appeal and possible retrial. He called his attorneys “doggedly determined and excellent” on the day of his release. Since his release, Pursley has been further developing “I Am Kid Culture” – a program he created to steer at-risk youth away from the perils of gang life and toward education and community.

Jenner & Block, working with the Northwestern Center on Wrongful Convictions, has been representing Pursley since 2008. Murphy, an associate in Jenner & Block’s litigation department, joined the team on Pursley’s case in May 2016.

“Notre Dame Law School instills in students that they should use their legal skillset to be a force for good in the world and devote their skills to public service wherever possible,” Murphy said. “I had an opportunity to do that, and I jumped on this case.”

During his time as a law student, Murphy was executive editor of the Notre Dame Law Review and represented indigent felony defendants as part of the Advanced Criminal Justice Externship. After graduation, he served as a law clerk for one year under Judge Paul J. Kelly Jr. of the U.S. Court of Appeals for the 10th Circuit in Santa Fe, N.M.

Daniel R. Murray, of counsel at Jenner & Block, has been a mentor to Murphy. Murray earned his bachelor’s degree at the University of Notre Dame in 1967 and his J.D. at Harvard Law School. He also teaches at Notre Dame Law School as an adjunct professor.

“Kevin is a wonderful young lawyer, and he’s also a very committed Catholic,” Murray said, noting that Murphy was elected secretary of the Catholic Lawyers Guild of Chicago in May. “His commitment to pro bono work has been an inspiration to the other lawyers in the Catholic Lawyers Guild. He’s evidence of the kind of lawyer Notre Dame Law School gives the bar – a lawyer who really makes a difference.”