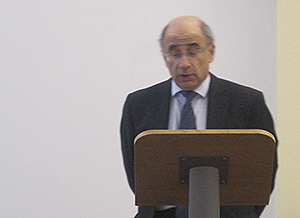 Lord Justice Brian Leveson spoke to law students, faculty, and guests at Notre Dame’s London Law Centre in March. As chair of the United Kingdom’s Sentencing Council, the recently formed body charged with giving guidelines to judges in the criminal courts, he spoke about the work of the Council in ensuring that sentences are consistent and proportionate and discussed the practical issues this gives rise to both in the United States and the United Kingdom. Lord Leveson is a Court of Appeal judge who previously appeared as an advocate in several high profile criminal cases.

At the request of Prime Minister David Cameron, he conducted the public inquiry into the culture, practices, and ethics of the press. The Leveson Report has recommended new measures aimed at curbing press abuses in the future, prompting extensive discussion in Parliament and the media about the impact of such measures on a free press. This topic will be at a conference involving academics, journalists, and legal practitioners held at the London Law Centre in May.

Lord Justice Leveson was appointed to the High Court in 2000 and is a Privy Councilor and an honorary fellow of Merton College, Oxford. He has acted as Presiding Judge for England and Wales. For ten years he combined practice at the Bar with lecturing in Criminology at Liverpool University. In 2012 he was appointed Chancellor of Liverpool John Moores University.