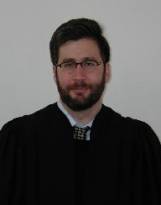 The Center for Civil and Human Rights congratulates Pablo Saavedra Alessandri, a 1996 Notre Dame LLM graduate, who this week was reelected to a second five-year term as Executive Secretary of the Inter-American Court of Human Rights. According to the Court’s press release, the judges agreed on Saavedra’s reelection base on his outstanding performance during his first term as Executive Secretary, from 2003-2008.

Saavedra is a Chilean national, who obtained his law degree from the University Diego Portales in Santiago and completed his Master in International Law at Notre Dame, graduating in 1996. After completion of his Master degree, Saavedra worked as a lawyer for the Inter-American Commission on Human Rights for four years. In 2001, he was appointed as Deputy Secretary of the Inter-American Court.