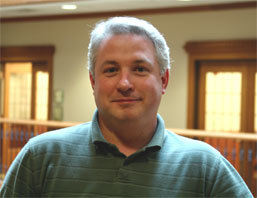 Scott Hengert came to the South Bend area nine years ago when he was offered a computer networking position with IKON Office Solutions. As a sub-contractor in technology with IKON, Scott came to campus often and became well acquainted with Notre Dame and Dan Manier, Director of the law School Information Technology Department. Dan hired Scott in October of 2008 as the Educational Technology Analyst for the Law School Information Technology Department. In this capacity, Scott enjoys using his talents writing software, creating new features to existing systems and adding intuitive refinement to software programs. Specifically, Scott adds electronic functionality and features to classroom control systems within the law school.He also instructs students and faculty in the use of these systems. Scott is adept at sharing his technical “know how” by translating technical jargon into every day English and presenting information in a way that is comprehensible to everyone.

Scott loves working with state of the art software and equipment at Notre Dame. In his office there is electronic equipment everywhere, including a master control board for video systems in the law school, a Linux computer test fixture for pilot testing of software and hardware control, and an impressive Crestron test-bed that is used to test Crestron software written in-house. In a side room is an enormous structure referred to as the “Rack,” which controls video switching for all the law school’s classrooms.

Scott is an understanding, empathetic, friendly, creative, and technically savvy person. He comes by these qualities naturally, avocationally, and academically. His mother was a teacher and his maternal grandfather, who had great impact on Scott, was his childhood hero. As Scott says, "Everything he did was amazing. He was a farm mechanic, meaning his craft was highly creative and versatile. He was also a welder who could fix or make anything. People came from all over for his help.” Scott, like his grandfather, is a mechanic, and like his mother, he has a natural understanding of what is required with hands-on instruction.

Scott’s hobbies include astronomy, computer science, electronics in general and model airplanes. He loves sharing his passion for astronomy with others and instructing them in the use of telescopes. Scott’s father, a business executive with GTE, introduced Scott to making and flying model airplanes and rockets; an activity they both enjoy doing together and with friends even today.

Scott also uses his talents to volunteer with the Red Cross providing emergency communications as a Ham Radio operator. But his real love is Buses by the Beach, which supports the national charity The Phoenix Burn Survivors’ Foundation. This organization raises funds for burn victims and helps them transition from victims to survivors through camping out in buses and socializing. “Since I am a mechanic, I volunteer my services fixing the old or broken down buses. They call me ‘Scotty the Bus Healer.’”

Scott was born in West Frankfort, Illinois and grew up in Bloomington, Indiana; Wilton, Connecticut; and Vincennes, Indiana, and Indianapolis. Today Scott lives in South Bend and has a 3 year old daughter, Grace, who is the love of his life.

This article is from the Library Newsletter, July/August 2009, Volume 1, Issue 2.

To read more about the library, see the Library Newsletter