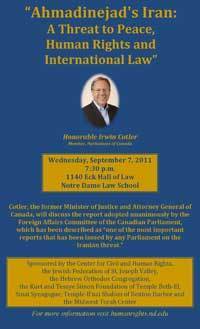 A light reception will follow the lecture.
Co-sponsored by the Jewish Federation of St. Joseph Valley, the Hebrew Orthodox Congregation, the Kurt and Tessye Simon Foundation of Temple Beth-El, Sinai Synagogue, Temple B’nai Shalom of Benton Harbor and the Midwest Torah Center.

In particular Cotler, who is a member of the Foreign Affairs Subcommittee on Human Rights that drafted the report – and appeared as well as an expert witness before the committee – said that the report contained 6 principal Findings and Recommendations that “can serve as a model not only for Canada, but for other governments as well.”

First, the committee determined that Iran had already committed the crime of incitement to genocide prohibited under the Genocide Convention and called for State Parties to the Convention such as Canada to hold Iran to account.

Second, the report called for comprehensive economic sanctions targeting the energy, petroleum, financial, investment, insurance and transportation sectors.
Third, it called for the sanctioning of the central bank of Iran –which is the nerve centre of the Iranian financial system.

Fourth, the report called for the Canadian State Immunity Act to be amended authorizing Canadian victims of Iranian terror to initiate civil suits against the perpetrators in Canadian courts.
Fifth, it called for the Iranian Revolutionary Guard Corps (IRGC), the epicenter of the Iranian threat, to be listed as a terrorist organization.
Sixth, it called for comprehensive sanctions targeting those engaged in the massive domestic repression in Iran.

Cotler said that the multilayered approach to sanctions was particularly important: “thus far, the sanctions have targeted the nuclear threat, which is both understandable and necessary, but by not targeting the genocidal incitement, terrorist and human rights threats, it ends up marginalizing if not sanitizing these threats.”

Cotler concluded by cautioning that it was important not only to enact sanctions but to enforce them. Otherwise it is as if the sanctions were never adopted to begin with. He pointed out that from 2000 – 2009 the USA, although it had already adopted a sanctions regime, nonetheless awarded $115 billion in contracts to corporations trading with Iran.

He noted that the research of the R2P Coalition has already determined that the sanctions adopted this past summer at both the UN and country levels are not being effectively enforced, while countries like Brazil, China, and Turkey are enhancing their trade with Iran and thereby undermining the sanctions regime.

The electronic version of the report is available: http://www2.parl.gc.ca/HousePublications/Publication.aspx?DocId=4835870&Language=E&Mode=1&Parl=40&Ses=3

Professor Cotler is Chair of InterAmicus, the International Human Rights Advocacy Centre based at the McGill Law Faculty; and was Co-Chair of the Canadian Helsinki Watch Group. He has defended political prisoners in Peru, Argentina, Tunisia, China (KunLun Zhang), Nigeria (Wole Soyinka), Indonesia, South Africa (Nelson Mandela) and the former Soviet Union(Andrei Sakharov, Natan Sharansky, Aleksandr Nikitin) and he has addressed major academic gatherings and Parliamentary committees in North America, Europe, Asia and the Middle East. He has argued before the Supreme Courts of both Canada and Israel. He is an Officer of the Order of Canada, a member of the Académie universelle des cultures, and was awarded the Justice Walter Tarnopolsky Memorial Medal, the Medal of the Bar of Montréal, and the Martin Luther King Jr Humanitarian Award, among many other awards and ten honorary doctorates.

In 1999, Professor Cotler took a leave of absence from the Faculty of Law and was elected Member of Parliament for the federal constituency of Mount Royal. He served as Minister of Justice and Attorney General of Canada from 2003 to 2006, and was recently named Emeritus Professor. Professor Cotler’s work in genocide prevention and persecution of criminals has received international attention. He has worked tirelessly to bring Nazi war criminals to justice and convey the magnitude of the Darfur genocide to the public. Most recently he is working to hold the Iranian leadership to account for state-sanctioned incitement to genocide under the UN Charter and the Genocide Convention.

Professor Cotler has been a Visiting Professor at Harvard Law School and a Woodrow Wilson Fellow at Yale Law School.