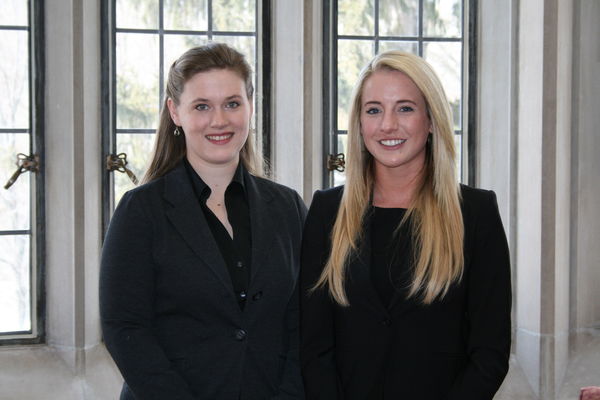 The Shaffer Fellowship, a highly competitive program funded entirely by annual donors, pays the Fellows’ salaries, health and other benefits for two years.

Binzoni will work with the National Immigrant Justice Center in Chicago supporting the Asylum Project by representing clients applying for humanitarian parole, withholding of removal, asylum, deferred action and special immigrant juvenile visas. Binzoni, a fluent French speaker, will be working particularly with the 40 percent of NIJC’s clients seeking asylum from West Africa.

“My proposal focuses on providing a voice for those who would otherwise be voiceless and forced to navigate the complex and confusing asylum process alone,” Binzoni wrote. “Notre Dame strives to produce lawyers who view their profession as a vocation to work in the service of others. My representation of asylum seekers and NIJC will allow me to assume exactly that role.”

Passinault, a 2010 graduate of Loyola University in Chicago, will work with the Legal Assistance Foundation of Chicago educating and representing human trafficking victims seeking immigration visas as well as helping with domestic violence issues and access to healthcare.

“As a fellow, I would be empowered to further strengthen the relationship between service organizations in the community and the common clients they serve, thus providing greater holistic aid services, Passinault wrote. “This project furthers the mission of Notre Dame Law School in that it provides immigrant communities in Chicago with legal assistance that acknowledges the human dignity inherent in every individual, no matter their citizenship or economic status.”

The Thomas L. Shaffer Public Interest Fellowship is named after Professor Shaffer, the Robert and Marion Short Professor Emeritus of Law at NDLS. One of the nation’s most prolific legal authors, Professor Shaffer has written nearly 300 scholarly works in his varied areas of expertise including estate planning, law and religion, legal ethics, and more recently, clinical teaching and legal counseling. Professor Shaffer joined the NDLS faculty in 1963 and in his tenure was a supervising attorney in the Notre Dame Legal Aid Clinic (now called the Notre Dame Clinical Law Center), teaching clinical ethics and guiding the legal practice of the law students who serve the under-privileged of greater South Bend, Indiana.

Previous Shaffer Fellows and their projects were: