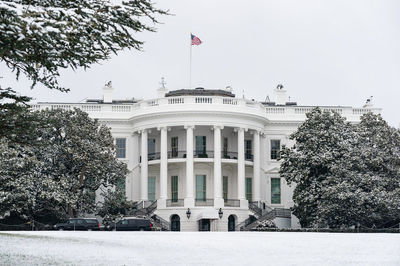 A recent presentation by presidential scholars Kathryn Dunn Tenpas and Chris Lu gave Notre Dame Law students a rare glimpse behind the scenes of the handoff from one presidential administration to the next.

The event, “An Unprecedented Transition,” took a look at the period of time between the November 2020 election and the January 2021 inauguration of President Joe Biden.

“Our system is unique when compared to other industrialized democracies,” she said. “What you find is that they have a much higher percentage of their civil servants as apolitical — they serve from administration to administration.”

The U.S. has around 4,000 political appointments, with around 1,300 requiring Senate confirmation. That’s one reason why the transitionary period — roughly 11 weeks from the election to inauguration — is important for staff searches and vetting, among other things.

Tenpas called the 2008-2009 transition from President George W. Bush to President Barack Obama the “gold standard” of interaction, peaceable unity, and information sharing. On the other hand, the 2016-2017 and 2020-2021 transitions between Obama and President Donald Trump and then Trump and President Joe Biden were “anything but,” Tenpas said.

The transition begins when a candidate gets “ascertainment,” an amorphous term that falls under the responsibility of the General Services Administration and represents when a candidate is the presumptive winner. The 2020 election was unique in that ascertainment didn’t occur until around three weeks after the election — leaving just eight weeks for the official transition. Tenpas said the language and procedure surrounding ascertainment should be clarified.

With all of the moving parts considered, the concept of a transition of governmental power like what the U.S. government sees is amazing, Lu said.

“The fact we can pull this off every four or eight years is a testament to the concept of a peaceful transition of power that we’ve had in this country for more than 200 years.”

Lu, who led the 2008 transition for President Barack Obama and served as Deputy Secretary of Labor under Obama, said a good transition is one that starts months before the election. They began preparing months before the 2012 election, just in case Obama lost his reelection campaign, he said.

“We wanted to make sure that even if we lost that we handed over the reigns of power in a responsible way,” he said.

Lu also assisted with the Department of Labor transition for President Biden.

Lu said that, even with the delay for transition funds and resistance from the Trump administration, Biden was uniquely prepared for his transition from his years of service as an elected official in the Senate and as vice president.