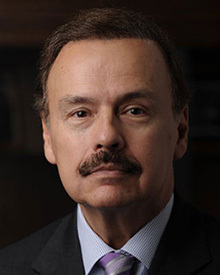 Jimmy Gurulé, professor of law, with six other law professors who teach and publish in the field of national security law, has filed an amici curiae, or friends of the court brief, on behalf of the families of the 241 U.S. servicemen killed in the 1983 truck-bombing attack on a Marine barracks in Beirut.

The case, Bank Markazi v. Peterson, concerns an appeal filed by Iran’s central bank contesting a July 2014 ruling by the New York-based 2nd U.S. Circuit Court of Appeals, which ruled that $1.75 billion in blocked Iranian assets currently held in a trust account in New York should be handed over to the victims’ families. This would begin payment on the $2.65 billion judgment the victims’ families won in a 2007 U.S. court judgement against Iran. The families have accused Iran of providing material support to Hezbollah, the Shiite Muslim militant group that carried out the attack.

“I decided to take the lead in filing an amicus curiae brief with the U.S. Supreme Court because I strongly believe that enforcing plaintiffs’ judgments with the blocked assets of Iran will provide some minimum closure and compensation for the surviving family members of the victims of the 1983 terrorist attack. Further, such action would hold Iran accountable for sponsoring the terrorist attack on the U.S. Marine barracks in Beirut, Lebanon, and deter Iran from supporting terrorist acts in the future. Ultimately, the Bank Markazi case is about seeking justice for the victims of international terrorism.”

Gurulé, an expert in international criminal law — specifically, terrorism, terrorist financing and anti-money laundering — has worked in numerous federal law enforcement positions and was instrumental in developing and implementing the U.S. Treasury Department’s global strategy to combat terrorist financing. He is been a member of the Notre Dame Law School since 1989.