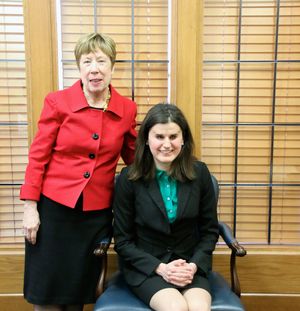 The Peter Lardy Memorial Fellowship for the 2015-2016 academic year is being awarded to 2L Laura Wolk, according to Dean Nell Jessup Newton.

“The Lardy Fellowship is one of the most meaningful awards NDLS can offer because it comes from the heart as well as the mind of the entire Law School community,” Newton said. “Bestowing this honor upon Laura is a testament to the high regard in which she is held by faculty and students alike, and a declaration that she has made the school a better place for having been here. I could not be more proud of her.”

Dedicated by the Class of 1975 to the memory of their classmate Peter A.R. Lardy and “those who exemplify his Courage, Love, and Understanding toward his fellow man,” the fellowship includes a substantial tuition remission for the recipient’s third year of law school.

“I am extremely touched and grateful that the Notre Dame Law School community has selected me to receive this award,” Wolk said. “Mr. Lardy’s life serves as an example for all NDLS students as we endeavor to live out the law school’s mission. It has been a privilege to have my legal conscience formed by so many wonderful faculty, staff, and students, and I look forward to emulating their and Mr. Lardy’s examples as I begin my legal career.”

Peter A.R. Lardy of the Class of 1975 died on January 6 of his third year. He was 28 years old, and had had cancer for 18 months. He was much loved by his classmates and the entire law school community. He was admired for his professional qualities, his generosity, his deep faith, and his quiet cheerfulness and good humor in the face of death.

His classmates established a scholarship fund in his memory and asked the Law School to administer it. The Law School community provides information about the nominated second-year students including letters of recommendation or supporting statements, from which it selects a student to hold the fellowship during his or her third year of law school.

Those who recommended Laura for this Fellowship described her as gracious, hard working and skilled, outgoing, diligent, active and energetic and an intelligent exceptional student with deep faith.

Wolk received her Bachelor of Arts degree in psychology from Swarthmore College, where she was a member of Phi Beta Kappa and the Sigma Xi honor society. At the University of Notre Dame Law School, she serves on the staff of the Notre Dame Law Review and has made Dean’s List each semester. She has worked as a research assistant to Professor O. Carter Snead and as a support coordinator for an organization devoted to helping the physically disabled.

Earlier this month Wolk learned that she was also being awarded a 2015 Latham & Watkins Diversity Scholarship. This scholarship is designed to increase the number of diverse law students who want to pursue a career in a global law firm and intend to practice law in the United States. Wolk, who went blind at 15 months from a form of retinal cancer, will be working as a summer associate at Dechert LLP this summer.

After graduation in 2016, Wolk will clerk for the Honorable Thomas M. Hardiman on the United States Court of Appeals for the Third Circuit.

Wolk’s name will now be added to the Lardy Fellowship plaque’s list of recipients, which includes 2014-2015 Fellow Christopher Stewart and extends back to the first recipient, John F. Ready, in 1976.