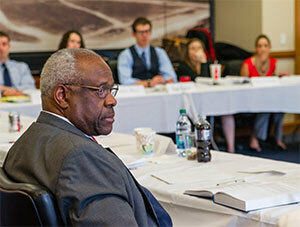 Dean Nell Jessup Newton noted that, “During the Justice’s previous visit to Notre Dame, he expressed an interest in returning to campus for this particular course. We were honored and delighted by his interest, and the seminar was an incredible opportunity and experience for the students.”

One of the students in the course, Sarah Quinn, remarked that “the opportunity to engage in deep discussion about religious freedom with Justice Clarence Thomas, along with Professor Garnett and other Establishment Clause scholars, is exactly the type of experience that makes Notre Dame a truly special place to be a student. Justice Thomas challenged us to rethink Establishment Clause precedent, welcomed differing perspectives and criticisms, and helped each of us develop a much deeper understanding of the interaction between church and state.”

In addition to teaching the course, Justice Thomas met with dozens of students and was a guest-lecturer in a first-year Constitutional Law course, as well as the upper-level Constitutional Criminal Procedure class.

"Justice Thomas’s dedication to students and his obvious concern for them was striking and inspiring. His conversations with them and remarks to them are more about finding balance and happiness in life, and about integrating one’s ideals, work, and faith, than about legal cases or political debates," said Garnett.