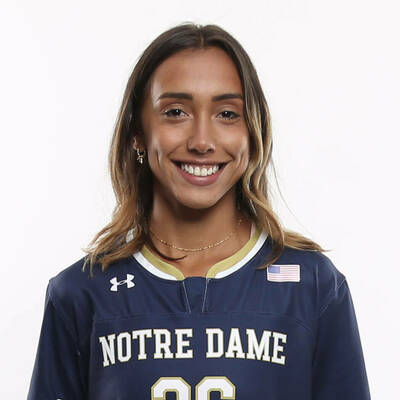 Like other first-year students at Notre Dame Law School, Julia Ware is experiencing the rigorous demands and adjustments that all new law students face. However, she is doing so while managing the responsibilities of being a Division I athlete at the same time. While pursuing her law degree with a full class schedule, Ware is also navigating daily practices and a 20-game season as a defender on the Notre Dame women’s soccer team.

Ware had two years of NCAA eligibility remaining when she graduated from Purdue University in 2021. After being admitted to Notre Dame Law School, she reached out to the coaching staff of the Fighting Irish soccer team, asking whether they would consider a player who was also committed to the full-time job of law school.

“I chose Notre Dame because I know it’s a place where I can not only compete at the highest level athletically, but one where I will be pushed to grow personally, intellectually, and spiritually,” Ware said. “The tradition of Notre Dame is based in a community rooted in service and high standards of excellence, and I couldn’t wait to be a part of that.”

In a May announcement, Doug & Lisa Jones Family Head Women’s Soccer Coach Nate Norman expressed his excitement about adding Ware to the team as a graduate transfer. “She makes an already extremely talented class even better,” Norman said. “She is an athletic, technical defender that will strengthen our back line. She will add tremendous experience and we can’t wait to begin working with her.”

Ware said support from both of her Notre Dame communities has helped her find a balance in her responsibilities and establish a sustainable routine.

“There are so many people here at Notre Dame who are ready and willing to help. I feel incredibly lucky to have support from both the athletic staff and my academic community. I have found that utilizing these resources and leaning on those around me has been incredibly helpful for me to balance these two responsibilities,” said Ware. “Additionally, law and soccer are both things that I am extremely passionate about, which makes the long list of responsibilities for each almost enjoyable to sort through.”

Ware was a starter during sophomore and junior seasons at Purdue, and played in every one of the Boilermakers’ matches during those years. During her sophomore year she was recognized as a Big Ten Distinguished Scholar and was named to the Academic All-Big Ten List. As a junior, Ware was appointed to the NCAA Division I Competition Oversight Committee, her term running through June 2022.

She said the Notre Dame Law School mission to educate “a different kind of lawyer” resonates with her and describes the type of advocate she hopes to be after law school.

“My intent is to become a lawyer who advocates for female minority athletes, who have been historically labeled as second-class citizens in the athletic community. And I know that my own experiences will be invaluable in achieving that goal,” she said.

Ware cites her soccer career as influential in her life in a number of ways. She says it has made her a collaborative leader, a relentless competitor, and has afforded her the skill of self-evaluation.

“Soccer has taught me to endure even the most difficult challenges and how to recognize the importance of always working to be the best I can be. These are skills that have already proven useful in law school, and I know their applicability will only continue to expand,” said Ware.

Ware continues the student-athlete tradition in her family at Notre Dame. Her mother competed on Notre Dame’s track and field team in the late 1990s, and her step-father was a captain on the Notre Dame cheer team. In addition, Ware’s father played college baseball and her sister played collegiate soccer.