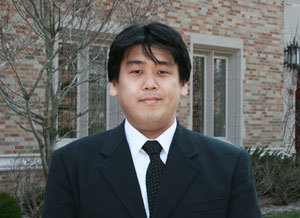 As a judge on the Sendai Family Court in Japan, the cases before Takeshi Nobuhiro are much like the cases one would see in an American courtroom—child support, custody, and divorce among them. The difference is in procedure, and that is what Nobuhiro set out to understand when he arrived at Notre Dame Law School in August 2009.

Nobuhiro is one of 30 judges chosen by the Supreme Court of Japan to study law and judicial system in a foreign country for a year as part of the Overseas Training and Research Program. “I have attended classes here, and have observed hearings and trials at the courthouse in South Bend,” says Nobuhiro. “One major difference I’ve noticed is that judges in Japan spend much time during the preliminary stage of a trial to narrow the issues and attempt to reach a settlement. American judges do not seem to take such an approach in the early stages of a case.”

Nobuhiro earned his Bachelor of Law degree from Kyoto University (an undergraduate program), followed by the required one-and-a-half years of legal training. He says the environment at Notre Dame Law School is one he’s never experienced. “The students seem to be very diligent. When I was in University, I’m not confident I could have studied so hard. They prepare well, read many materials, and discuss thoughtfully with professors.”

Nobuhiro says that, while he won’t implement what he’s learned here into his courtroom practice when he returns to Japan in July, he is grateful for the opportunity to expand his knowledge of the law and have exposure to different ways of doing things.