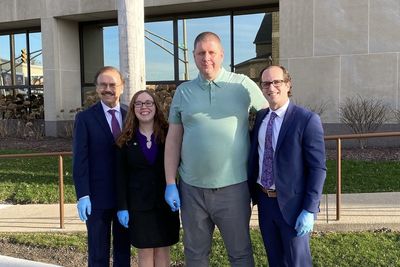 An order overturning a wrongful murder conviction and granting a new trial, pursued for several years by students and faculty in Notre Dame Law School’s Exoneration Justice Clinic, was affirmed by the Indiana Court of Appeals last week in a 50-page opinion.

Andy Royer, a mentally disabled man, served 16 years in prison after he was wrongfully convicted in the 2002 strangulation death of an elderly woman in an Elkhart, Indiana, apartment building where he resided. Royer has said for years that police exploited his disability to coerce a false confession.

In April 2020, a Kosciusko Superior Court judge granted Royer’s petition for a new trial and ordered him released. The Indiana Court of Appeals affirmed the lower court’s ruling on April 8.

Notre Dame Law School’s Exoneration Justice Clinic has worked on the case since 2017. Notre Dame Law students have been involved at every stage of the process to overturn Royer’s conviction, including conducting early investigations, drafting a successive petition for post-conviction relief, participating in an evidentiary hearing, and most recently working on drafting the respondent’s appellate brief and preparing for the appellate oral argument.

Exoneration Justice Clinic Director and Professor Jimmy Gurulé said that, in addition to correcting a gross miscarriage of justice, the process of litigating this appeal has been an invaluable learning experience for the clinic’s students.

“The students investigating and litigating the Royer case have experienced first-hand the power of the law,” Gurulé said. “Their hard work freed an innocent man from prison.”

More information on the Exoneration Justice Clinic can be found on the Law School’s website.