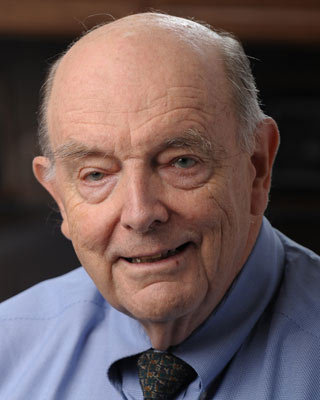 It is with a heavy heart that the Law School announces the death of Professor Emeritus Robert E. Rodes Jr., who passed away Tuesday morning, November 25, 2014.

Professor Rodes joined the Notre Dame Law School faculty in 1956 as an assistant professor of law, achieved the rank of associate professor of law in 1958 and was named professor of law in 1963. In 2000, the University honored him for his more than 40 years of teaching and scholarship in the fields of legal ethics and jurisprudence by naming him the first permanent holder of the Paul J. Schierl/Fort Howard Paper Corporation Chair in Legal Ethics.

The many of us who loved him, loved him for his character as much as for his extensive and superb scholarship (a bibliography of which can be found in Thomas L. Shaffer, Christian Jurisprudence of Robert E. Rodes Jr., 73 NOTRE DAME L. REV. 737 (1998)). Bob was an essential part of Notre Dame Law School for more than 50 years. Though he retired earlier this year, he remained as intellectually vigorous and engaged as ever, most recently working on final touches on a book manuscript.

His junior and senior colleagues relate remarkably similar stories about his deep and lasting impact on their lives. U.S. Seventh Circuit Judge and Professor Kenneth F. Ripple provided an apt metaphor in describing Bob’s impact on the Law School: “Every great institution has, as Scripture describes them, ‘living stones’ —individuals who, sometimes at great personal sacrifice, become the foundation of all the accomplishments that come afterward. At Notre Dame Law School, Professor Bob Rodes will always be a supporting part of the foundation of this very special law school. He loved his students; he loved his colleagues; and he loved what he called the ‘legal enterprise’ in which we all work together. He was the voice of the Spirit, always reminding us of our better selves.”

“In person,” said Professor James Seckinger, “Bob’s love of people and generous spirit was as powerful as his intellect. When I first arrived at Notre Dame Law School as a member of the faculty, Bob Rodes, the theorist and historian, offered his time and guidance to help a new teacher develop a trial advocacy program at Notre Dame and learn how to teach aspiring litigators. Our walks around the lakes were always full of helpful ideas and calming advice that greatly assisted my transformation from the practice of law to academic endeavors. Bob’s love of the intellectual life and his kindness toward each and every person is forever embedded in the Notre Dame Law School. His mission in life has been accomplished and he is with the communion of saints.”

“Professor Rodes was my teacher, colleague, and friend,” said Professor Richard Garnett. “He welcomed me warmly when I arrived, as a new law teacher in 1999, and he has guided and encouraged me ever since. His ‘blood is in the bricks’ of this community of learning and lawyers, which he has served and shaped for more than five decades. His generosity, charity, and decency have been a blessing and an inspiration to so many scholars, students, lawyers, and clients. Whether the subject was workman’s compensation law, liberation theology, church-state relations, or courtly love, Prof. Rodes was engaged, curious, and insightful. He made the Law School and its Christian mission of scholarship and formation his vocation, and all of us who are connected to or care about that mission are thankful to him.”

And my predecessor as dean, Professor Patricia A. O’Hara, has observed that “Although I did not have Bob in class as a law student, he taught me a great deal about what it means to be a generous colleague. In my early years on the faculty, I benefited from his mentoring, and I watched the gentle way in which he built consensus among senior colleagues of differing views. During my tenure as dean, I was privileged to share with Bob the news of his appointment to a chaired professorship – the culmination of a lifetime devoted to scholarly pursuits and to service of God in the tangle of his mind. In this day and age, it is rare to find someone who devotes more than 50 years of professional life to a single institution. Such was Bob’s love for Notre Dame and her Law School. Bob frequently ended his messages to colleagues with a few words in Latin. On this occasion, we wish Bob eternal rest: Requiem aeternam dona ei, Domine, et lux perpetua luceat ei.”

He taught and wrote in the areas of administrative law, civil procedure, ethics, jurisprudence, law and theology, legal history and welfare legislation. He was a member of the Catholic Commission on Intellectual and Cultural Affairs.

We extend our deepest sympathies to Bob’s beloved family, including his wife, Jeanne, and his children Anne, Bob, David, John, Mary, Paul, and Pete.

Internment at Cedar Grove Cemetery will take place immediately after the Mass.

The Law School and the Rodes family invite Bob’s friends and colleagues to attend a reception at the Private Dining Rooms (Carmichael, Joyce, and Hesburgh) at the Morris Inn from 5:30 p.m. to 7:30 p.m. after the graveside ceremony.