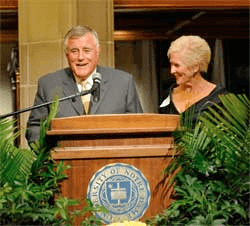 I am very sorry to report that Robert F. Biolchini, a trustee and generous benefactor of the Law School, passed away November 8 in Jackson Hole, Wyo.

Bob was a 1962 Notre Dame graduate and earned his law degree from George Washington University. He was a partner with the Tulsa, Okla., law firm of Stuart, Biolchini & Turner and served as a temporary appeals judge for the Oklahoma Supreme Court. Until his retirement in 2015 he was the president and chief executive officer of PennWell Corp., a privately owned Tulsa-based media company founded in 1910 that publishes 75 international weekly and monthly business-to-business magazines and conducts more than 60 business-to-business conferences and exhibitions on six continents. He was also a director of American Business Media, the chief executive officer of Valley National Bank, Lake Bancshares, and Ameritrust. He was a captain in the U.S. Army.

After falling in love with Jackson Hole as a college student when he worked summers as Bell Captain at the Old Faithful Inn, he and his beloved wife Fran moved to the area in 1971 to build a home and raise their family. In 1982, he and two partners launched the Bank of Jackson Hole as a small startup that was housed in a trailer.

Bob’s faith was deep and sustaining. He loved Notre Dame and the Church, which he served as a Knight of The Sovereign Military Order of Malta and of the Holy Sepulchre and as chair of the Diocese of Tulsa Fund for the Future. He served on both the Notre Dame Board of Trustees and the Law School Advisory Council. He and Fran also created the Biolchini Family Chair in Law as well as the Erma V. Biolchini Endowed Scholarship Fund, named in honor of Bob’s mother.  In addition, their transformative gift was a linchpin in the renovation of our original law building, now renamed Biolchini Hall of Law.

Characteristic of their dedication to family, in 2010 Bob and Fran dedicated the renovated Biolchini Hall of Law “to their six children and to all those who study here, seeking God’s Justice through Faith and the Rule of Law.” Today Bob’s son Thomas Biolchini carries on the family tradition of service and is a member of our law advisory council.

Biolchini Family Professor of Law John M. Finnis said, “No chair benefactor could have been more warmly and tactfully generous than Bob in hospitality and friendship for me and my family, and in sustained expressions of hope for the good of the university and school that he loved, and that he and Fran — at the heart of Bob’s prodigious global activity and presence, so enthusiastic for people and their peoples – have wished and done the best for in difficult times as in good times.”