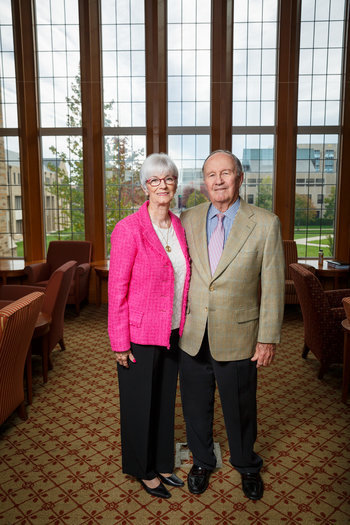 I am very sorry to announce that one of our most cherished alumni, Judge Tom O’Toole, passed away on October 13, 2016.

A member of the NDLS Advisory Council since 2011, Tom and his wife Elaine generously endowed the O’Toole Professorship of Constitutional Law, a chair now held by Professor A.J. Bellia. Tom’s generosity went beyond financial support to include the kind of advice and wise counsel that are so important to the functioning of a great law school.

Professor Bellia described Tom as follows: “Judge O’Toole, along with his wife Elaine, quietly advanced the mission of the Notre Dame Law School with their generous gifts. The programs that he established, such as the Program on Constitutional Structure, have advanced academic learning in ways that help students follow his example of pursuing a vocation in law not for one’s self, but for the common good. For all his generous gifts, I am deeply grateful. I am most grateful to Judge O’Toole, however, for his presence and example. His advice was measured and insightful, his manner kind and unassuming, and his character steadfast and compassionate. His greatest contributions — quiet counsel at dinner, an unsolicited word of encouragement, a difficult but well-grounded decision — may never receive public notice, but they will bear fruit for years to come in the lives of those who knew him. We are ever grateful for his friendship, and pray that his family may know God’s comfort and peace.”

Tom was a Notre Dame lawyer. He earned his Bachelor’s degree in Economics from Notre Dame in 1960 before attending the University of Arizona for his J.D. He encouraged the Law School to form a lawyer’s committee in Phoenix and it was a pleasure to attend several events there where I could see the respect and love accorded Tom by his colleagues in Phoenix.

Tom began his legal career as an Assistant Federal Public Defender in Arizona before being named the Federal Public Defender for the District of Arizona. In those challenging positions he gained invaluable experience that prepared him exceptionally well for his decades of service on Arizona’s Maricopa County Superior Court, where he served in the criminal department as both associate presiding judge and presiding judge. Among his many judicial honors, Tom served as president of the Arizona Judge’s Association and was named Judge of the Year by the American Board of Trial Advocates.

Tom was a great and kind man. He reached out to others, who like him, lived with serious illness and was a model of grace and clear-eyed resolve to live with dignity and to put the focus on his family, his friends, his faith, and the communities in which he was such an important figure. He will be greatly missed.

Judge O’Toole is survived by his wife, Elaine Senini O’Toole, his two brothers, Dennis O’Toole (Trudy) and Michael O’Toole (Noreen), his 4 sons, Nicholas (Megan), John (Sofía), Ryan (Minjeong) and Matthew (Anna), and 4 grandchildren, Lulu, Carleton, Velouria and Simón Tomás. A Funeral Mass will be held at 12:30 p.m. on Saturday, October 22, 2016, at St. Francis Xavier Church in Phoenix. Burial will be on Monday, October 24, 2016, for family and close friends.