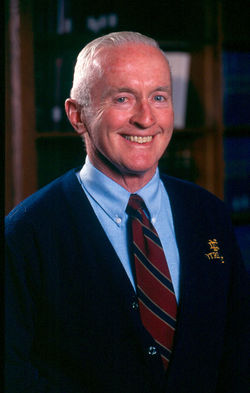 Perhaps no man in recent memory has better embodied the motto inscribed over the door to the Basilica of the Sacred Heart than Professor Charles E. Rice. A devout Catholic, a Marine, a professor, and a coach, Professor Rice did it all, and always with an abounding sense of humor and purpose. It is therefore with a heavy heart that the Law School announces his passing on February 25, 2015.

On a personal level, I will miss Charlie greatly. Although we started off on the wrong foot — I foolishly said to him at our first meeting, “You were in the Navy, right?” The scowl and growled “Marines” almost knocked me off my feet. Nevertheless, we formed a strong bond. What I loved about Charlie was that he valued everyone’s individual integrity. What mattered to him was how well you treated others, even more than whether you agreed with him on every point. Faculty, students, and alumni will miss him dearly and our phones have been ringing off the hook with inquiries all day as the news has spread. Alumni have shared stories and tears in discussing the impact Charlie has had on their lives.

For generations of students, Professor Rice was a foundational pillar of a Notre Dame Law School education. As a member of the faculty since 1969, his scholarly work profoundly impacted graduates as well as colleagues around the country. A noted expert in the area of Natural Law, Professor Rice served as a consultant to the U.S. Commission on Civil Rights and to various congressional committees on constitutional issues, wrote numerous books and articles, and was a sought-after speaker.

However, his legacy will be more than his academic prowess. It will also be his concern and care for our students. Alumni often recount being filled with anticipation and dread when waiting to be called upon. There was no need to raise a hand; Professor Rice would simply shout out a name and expect the student to stand and answer the question. At the same time, his humor was also legendary. One could simultaneously regard Charlie’s class as the most academically daunting and the most entertaining experience of a law school career. It certainly was my experience that the professor who could seem so formidable could be tenderhearted when focusing on an individual. Simply put, he loved teaching. Although he had been an emeritus faculty member for years, he continued to teach the current generation of law students, as recently as last fall.

“I was in the Marine Corps and trying to decide which law school to attend,” recalls former student John LaDue '90 J.D. “I came for a visit to Notre Dame and was told I should meet Professor Rice. The next thing I know, this icon of the school was asking me and my wife out to lunch. Professor Rice took the time to find out about me, my family, my goals. That was the kind of man he was. He genuinely took a personal interest in us not only as law students, but as attorneys and as people. Several of my firm partners had him as well and they all have similar stories. He went beyond just being a great teacher. He is a great example of how to be a good person.”

A man who stood by his beliefs no matter what, he respected those who opposed him, and the feelings were mutual. Never one to shy away from a fight, Professor Rice was willing to take on the difficult battles for what he knew to be the truth. An outspoken advocate of the need to respect life from conception to natural death, he enthusiastically worked to promote the teachings of the Catholic Church. For example, he played an important role in developing EWTN, often appeared on that network, and was a frequent contributor to many media outlets. According to Michael Warsaw, Chairman of the Board and CEO of EWTN Global Network: “His contributions to EWTN, the Church, and our nation are countless. We will all certainly miss him greatly.”

Professor Rice was also willing to take on a battle in a sporting way through his long time affiliation with the University’s Bengal Bouts, a boxing tournament that raises funds for the Holy Cross Mission in Bangladesh. As a coach, referee, and faculty adviser, Professor Rice used his Marine training to demonstrate his tenacity in the ring, even as recently as four years ago when he was still volunteering as a referee.

“Around 1985, Charlie helped to write down and codify all the safety procedures and protocols for the Bouts,” explains Terrence M. Johnson ’78 J.D., a former student and current Bengal Bouts consultant. “Safety, self-reliance, sportsmanship, mutual respect for one’s fellow competitors, and a sense of fun, were all priorities in Charlie’s mind. We were boxers and contestants — not fighters. He taught us how to show restraint in the ring and in life. Charlie stressed that boxing was a sport that prepared us for challenges. You will get hit and maybe knocked down, but you have to get back up. He will be greatly missed, and I look forward to the day we can reunite and talk about torts.”

Born in 1931, Professor Rice received his B.A. degree from the College of the Holy Cross, his J.D. from Boston College Law School and his L.L.M and J.S.D. from New York University. The devoted husband of Mary, he was the father of 10 children.

I was so sad to get Kathleen Rice’s text announcing that “Dad has gone home.” But I was also heartened to know that he was surrounded by his loving family at the end. I know that his Notre Dame family will keep him in our hearts forever.

Visitation will be 4 to 8 p.m. Saturday and 2 to 7 p.m. Sunday, with Rosary being said at 6 p.m.at Hahn’s Funeral Home in Mishawaka. Funeral will be held Monday at 11 a.m. at St. Joseph Parish, Mishawaka. In lieu of flowers, memorial contributions may be made care of Fr. Terrence Fisher to St. Joseph Parish, Mishawaka, where he and his family have worshipped for 35 years and may also be made to the Charles E. Rice Fellowship at Notre Dame Law School, 1155 Eck Hall of Law, Notre Dame, IN 46556.