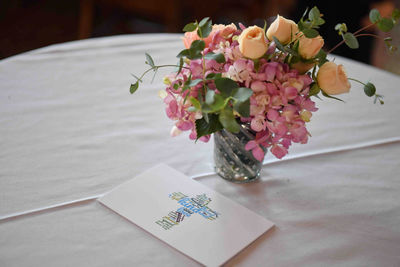 Our beloved colleague and longtime Law School registrar, Anne Christine Hamilton, died August 17 at St. Joseph Regional Medical Center in Mishawaka, Indiana, surrounded by her family. I am told that she knew that our close-knit community gathered to pray for her earlier that day in a special Mass in the Law School’s St. Thomas More Chapel and that this knowledge gave her comfort.

A funeral Mass was held at the Basilica of the Sacred Heart on August 22 and celebrated by Msgr. William C. Schooler of St. Pius X Catholic Church. Rev. David T. Link, the Law School’s former dean and professor emeritus, delivered the homily. Burial was at the Cedar Grove Cemetery on campus. 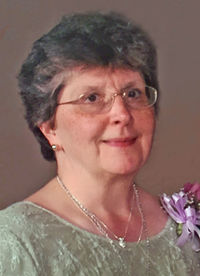 After the Mass and interment at Cedar Grove Cemetery, family, friends, staff, students, faculty, and alumni gathered at the Eck Commons to mourn together and share memories of Anne. Anne’s husband, James Powell, daughters Lalita (Tuan) Nguyen and Ruth Powell, brother John, and grandson Nicholas Nguyen marveled that none of them had ever heard Anne speak unkindly about anyone. Her former colleagues made the same observation regarding her approach to her job as Law School registrar. Throughout her 33 years of service, Anne always put the needs of Notre Dame Law School students first. Generations of students noticed, and they loved her for it. Athena Aherrera, who served as Student Bar Association president last year, told the gathering, “Anne was the epitome of grace, hard work, and kindness. She was truly loved by the students and NDLS community at large. Although she will be deeply missed, she will be in our hearts forever."

Many dozens more at the reception took the time to write their reflections on memorial cards that are being collected and will be presented to her family.

“Anne had an incredible ability to make everyone feel valued,” reads a typical card. “She shared in each student’s victory and each colleague’s good news as if it were her own.”

Another observes that “she blessed us with her constant help, her wisdom, and her compassion. We were inspired by her goodness to try to be better people, more generous, less complaining.” 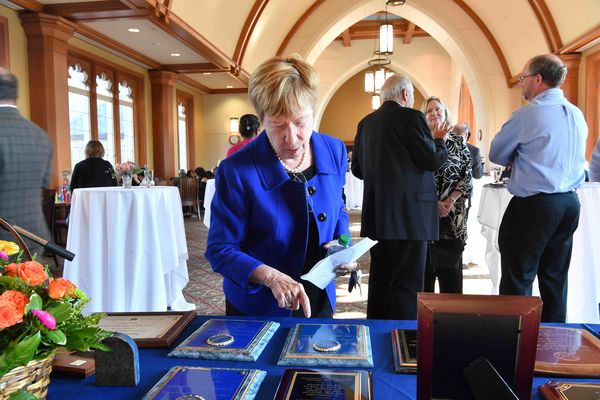 Dean Nell Jessup Newton looks at a collection of awards that Anne Hamilton earned during her many years of service as the Law School's registrar.

In addition to the tributes from current NDLS students, a number of former students sent flowers or condolence notes. A typical such note came from former SBA President Tim Dondanville '16 J.D., who upon hearing the news wrote me to say, "Anne was such a pillar for the Law School, and I personally felt better after every time that I talked to her. She truly shone the light."

Faculty too saw something special in the woman who managed one of the most stressful jobs at the Law School with such aplomb. Professor John Robinson, who worked with Anne from the earliest days and oversaw her work for a number of years in his capacity as executive associate dean, noted that “Ann became the face and voice of the Law School to hundreds of students in distress during her years as our registrar. She did everything in her power to help those students find their way through the regulatory maze that is legal education these days to their goal of graduation within three years, almost always with success.”

Fr. David T. Link reported that although he was the one who first hired Anne at the Law School, “she instantly became my colleague rather than my employee, because she was very clear that she was working for the students.”

I have thought long and hard about how we can honor the memory of this woman who did so much for so many students and asked so little for herself. I am honored to announce that in memory of Anne the Law School will give the Anne C. Hamilton Award each year to the graduating Notre Dame Law student who has done the most to help his or her fellow students.