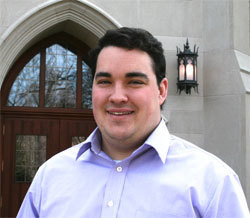 Second-year student Harrison St. Germain has been awarded the Peter Lardy Memorial Fellowship for the 2011-12 academic year. Dedicated by the Class of 1975 to the memory of Peter A.R. Lardy and “those who exemplify his Courage, Love, and Understanding toward his fellow man,” the fellowship includes a $20,000 tuition remission for the recipient’s third year of law school.

Mr. St. Germain hails from Warwick, Rhode Island, and received his B.A. from Wake Forest University. His name will be added to the Lardy Fellowship plaque’s list of recipients which includes 2010-11 fellow John Paul Foley and extends back to the first recipient, John F. Ready, in 1976.