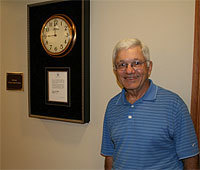 It’s always nine-o’clock at the north end of the Main Reading Room just outside Associate Dean, Ed Edmonds’ office. Hanging there on the wall is an old clock from the United States Supreme Court donated by Professor Roger F. Jacobs.

From 1978 to 1985, Professor Jacobs, was the librarian of the United States Supreme Court. He recalls that sometime after becoming director of the Kresge Law Library, he received a call from his former assistant at the Court, Emily Porter, who is still a senior member of the Library staff. ―As the old clocks were replaced staff members were invited to express an interest in assuming ownership of the clocks. She asked me if I would like to have one of the clocks. I said, I would love it! She then made the arrangements to obtain the surplus clock with a letter of authentication from the Architect of the Captiol, the official in charge of the Court renovation project.‖ The clock has been in Jacobs’ basement recreation room, but he says that ―as plans for the renovated law school took shape, I thought it would be nice to see it hanging in the law school library. It does look hand-some.

The letter of authenticity, dated February 1, 1989, states:
ABOVE: This wall clock was recently gifted to the Kresge Law Library from Professor Emeritus and former law library director Roger Jacobs. It hung in the Supreme Court Building from 1935 until 1989 when it was replaced during a renovation and given to Jacobs, formerly the Librarian of the Supreme Court.
This is to certify that the accompanying wall clock is one of the clocks which were part of the original clock and buzzer system that was installed in the Supreme Court Building in 1935 during the final phase of construction. They were removed from service recently when the system was updated and expanded. The original clocks, manufactured by Warren Telechron Company of Ashland, Massachusetts, were synchronous motor-driven clocks with cases of spun bronze. They were connected to an automatic central control system which made it possible to reset them from a single location; the buzzers, which were secured to the backs of the clocks, provided signals of various court activities. Signed, George M. White, FAIA Architect of the Capitol.

The buzzer system active in the Court’s Clock system was a simple one that indicated only two events. Five minutes before the Justices convened in the Court Room there would be one buzz; when the Justices stepped down from the Court Room there would be two buzzes. My understanding is that the Court’s new electric clock system continues this two-signal buzz system, Jacobs says. Click here to take a virtual tour of the Supreme Court.
-Beth Klein