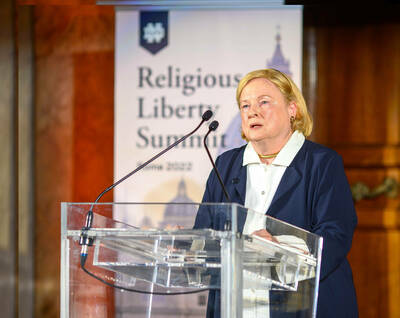 Mary Ann Glendon, the Learned Hand Professor of Law, emerita, at Harvard Law School and former U.S. Ambassador to the Holy See, has received the 2022 Notre Dame Prize for Religious Liberty. The award was presented on July 21 during the second Notre Dame Religious Liberty Summit in Rome, Italy.

The prize is given annually to one individual in recognition of their achievement and support in preserving religious liberty.

Glendon was honored for her distinguished service and scholarship to the United States and the Catholic Church — all of which have had a global impact by affirming religious freedom as a fundamental human right.

You can view a video about Ambassador Glendon’s life and work and a recording of her remarks at the awards gala below.