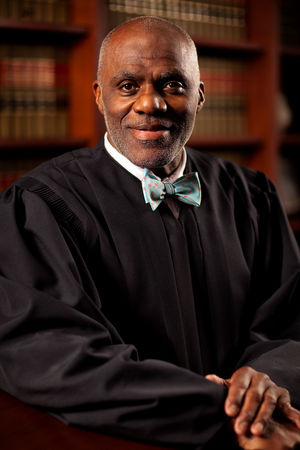 “Justice Page is a titanic figure who has reached the pinnacle of multiple professions in a way that few Americans have,” said Juwan Hubbard, 2L and president of the Black Law Students Association. “He is a complex legal thinker with varied experiences who broadened the intellectual scope of a prominent court in this country. We are delighted to welcome Justice Page to our great university and law school, and eager to hear from a man that so many of us revere.”

Page will speak to Notre Dame students in a conversation with Mark P. McKenna, associate dean for faculty development and professor of law, at 12:30 p.m. on Thursday, Oct. 27, in the Patrick F. McCartan Courtroom. McKenna himself played on the Notre Dame football team when he was an undergraduate.

“Justice Page is a trailblazer and an incredibly accomplished person, having reached the pinnacle of two very different professions,” McKenna said. “He’s a tremendous role model for law students and student athletes, and his life and work are a tremendous credit to Notre Dame and to the legal profession. We are extremely proud to have him back on campus.”

Page was the first African-American to hold a major state office in Minnesota and focused on examining racial bias in the Minnesota justice system. He will be visiting as the Judge James J. Clynes, Jr. Visiting Chair and will also be presented with the Moose Krause Distinguished Service Award during the Monogram Club’s 100th Anniversary Celebration.

“I am delighted that Justice Page has agreed to speak to NDLS students,” said Dean Nell Jessup Newton. “On the playing field and in the courtroom he has always exemplified the highest professional and personal standards.”

Page, a native of Canton, Ohio, earned consensus All-America honors as a defensive lineman and helped Notre Dame to the national championship during his senior campaign in 1966. He enjoyed a 15-year career in the NFL, which included four Super Bowl appearances with the Minnesota Vikings, nine Pro Bowl selections and the 1971 NFL MVP award. He is enshrined in both the College Football Hall of Fame and the Pro Football Hall of Fame.

Page graduated from Notre Dame in 1967 with a degree in political science and he earned his law degree in 1978 from the University of Minnesota Law School while still playing professionally. Page retired from the NFL following the 1981 season and continued practicing law before joining the staff of the Minnesota attorney general.

In 1988, Page and his wife Diane founded the Page Education Foundation, which assists students of color in their pursuit of post-secondary education. To date, the foundation has awarded more than $13 million in grants to more than 6,000 individuals.

Page was elected to the Minnesota Supreme Court in 1992 and was re-elected to that position three times before retiring in 2015.