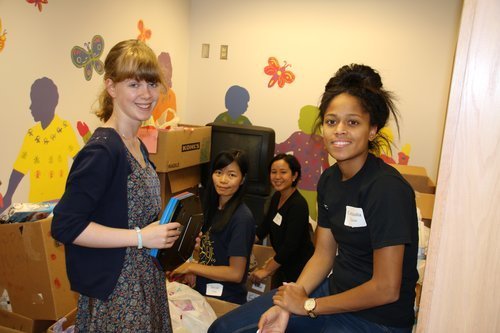 Cameasha Turner walked into South Bend’s Center for the Homeless earlier this month a little bit apprehensive, but mostly excited to volunteer in the community she would be calling home for the next three years.

As part of her Notre Dame Law School 1L orientation, the undergraduate basketball standout and Dallas native, spent the afternoon with a few of her new classmates sorting, organizing, and cleaning the shelter’s supplies.

“Working here today means a lot to me,” Turner said while vacuuming. “It reminds me of how far I’ve come.”

Turner grew up in a predominately black and poor community and is one of 11 children. Because her home life was not always stable — she said she witnessed a lot of crime and a lot of drug activity — she held on to the idea that her pursuit for academic excellence would elevate her and her family into better circumstances.

“I’ve always wanted a better life from what I grew up in,” she said. “I thought, that if I valued my education I could do something different.”

That’s exactly what Turner did. With the support of teachers, basketball coaches and even the parents of former teammates, she focused all of her energy on studying and playing basketball. Her hard work — constantly balancing practices and games with homework and exams — paid off. In 2012, Turner graduated as the valedictorian of her high school class and became the first person in her family to go to college.

“I wanted to be an example for my brothers and sisters and even my mom,” Turner said. “I wanted to show them what was possible.”

Not one to rest on her laurels, Turner brought the same passion to succeed and uplift her family to the University of Texas at El Paso. While at the Division I university, she led the women’s basketball team to several victories. In her senior year, Turner averaged 13.1 points and 4.8 rebounds per game and was named UTEP’s 2016 Female Athlete of the Year. If that wasn’t enough, she also graduated from the university with a 4.0 grade-point average.

“When I put my mind to something, I do it,” Turner said. “That’s how I treated basketball. I worked out and practiced to perfection. I’m taking the same approach to law school. I’m going to work hard and study to get the grades that I want.”

Turner started some of the groundwork to do well in law school, while she was still an undergraduate student. At UTEP, she participated in the school’s Patricia and Paul Yetter Law School Preparation Institute, which is designed to help undergraduates understand the legal profession and gain entrance to law school.

“It was a preview of what law school was going to be,” she said. “I took courses on torts and legal writing and they helped me prepare for the LSAT.”

With several top-ranked law schools vying for her enrollment, Turner said she chose Notre Dame because of the strong alumni network and, of course, it’s rich athletic reputation.

“When I came to admitted students weekend, all of the current students and alumni made me feel welcomed,” she said. “The support everyone has given me makes it feel a little more like home.”

While she said she is nervous for her first real semester of law school, Turner said she’s up for the challenge and is comfortable working under pressure.

“I’m naturally competitive and I want to be the best at what I do,” Turner said. “I’m not competing with my classmates, but I’m competing with myself. I’m going to know at the end of the day, I put my all into it, so whatever happens, I’ll know it was the best that I could do, and I can always live with that.”

To balance the stress of being a first-year law student, Turner plans on finding some down time to maintain her basketball skills. She plans to meet with Muffet McGraw, head coach of the Notre Dame women’s basketball team, and participate in the Bookstore Basketball Tournament, a 5-on-5 outdoor tournament that includes students, faculty, and staff from Notre Dame, Saint Mary’s College, and Holy Cross College.

Turner intends to say focused on her goal of being a criminal defense attorney and, ultimately, a judge.

“I always thought that if I educated myself people would listen to me,” she said. “After law school, I’m going to use my voice to help those who go unheard in our society and those who can’t afford legal representation.”

The world will get a chance to hear what Turner has to say well before she becomes a lawyer or a judge. Earlier this year, Turner was one of 10 NCAA athletes that will be highlighted in a series of commercials that show how academics and scholarship open doors of opportunity. She also was named as a top-30 honoree to the NCAA 2016 Woman of the Year Award.

Turner’s story will be told in commercials of varying lengths, from 15- and 30-second spots to longer two- to four-minute versions. They will air across various NCAA platforms, including Facebook, Twitter, and ncaa.com and ncaa.org, later this year.

“I want to give testimony to kids that even if they get a little discouraged, there are always resources, they can always keep working hard and make it,” she said.