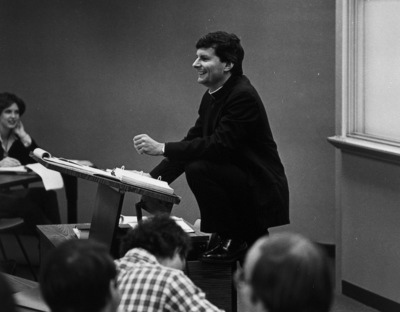 On a Tuesday evening in late March, the club at Legends of Notre Dame was packed with law students, faculty, and administrators. In the middle of a long semester, they ignored their studies and other regular responsibilities to stay out late on a school night, to laugh and to cheer.

It was time, once again, for the Father Mike Show – the annual menagerie that brings out the Law School’s hidden talent and raises money for scholarships and student activities.

Here’s a sampling of the lineup: Professor Bruce Huber rapped “Anne Hamilton: The Musical” in homage to the Law School’s revered registrar. Student musicians rocked an acoustic version of  “The Middle” by Zedd, Marren Morris and Grey. Sharon Bacon, senior office assistant in the Law School’s Admissions Office, played the spoons to a double standing ovation and applause loud enough to drown out Alabama’s “Mountain Music.”

Rev. Michael D. McCafferty, C.S.C. – also known as Father Mike – would have had a great time. He always loved the Law School’s variety show. He often played the role of “roving reporter” during the faculty news skit and closed out the evening with an Irish jig on stage. 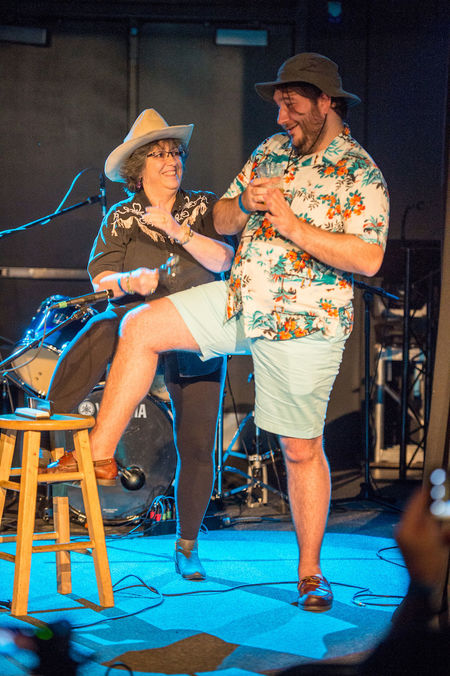 McCafferty was known for bringing people together, so it was fitting that Notre Dame Law students renamed the show in his honor after he died of non-Hodgkin’s lymphoma in 1987. More than three decades later, students still call that night of joyful fellowship the Father Mike Show. It’s but one example of the many ways that McCafferty’s legacy continues to live on in the community he helped build.

“He was an incredibly charismatic person,” said Professor Patricia O’Hara ’74 J.D., a former Law School dean and a member of the Law School’s faculty since 1981. “I always think of a wheel, and the kind of person who is the hub of the wheel. Father Mike was very much that kind of person. Many people were attracted to him, and he became the hub that connected them.”

McCafferty relished being the hub of the wheel. He always chose an office at the center of the Law School’s traffic patterns, and he kept a Waterford crystal biscuit jar filled with M&Ms as further motivation for people to visit him. Today, his Waterford jar continues to be well-stocked with M&Ms and sits in Dean Nell Jessup Newton’s office – except during Lent.

“At his core,” O’Hara said, “he was very influential in building that sense of community that we still have today.”

First and foremost, a priest 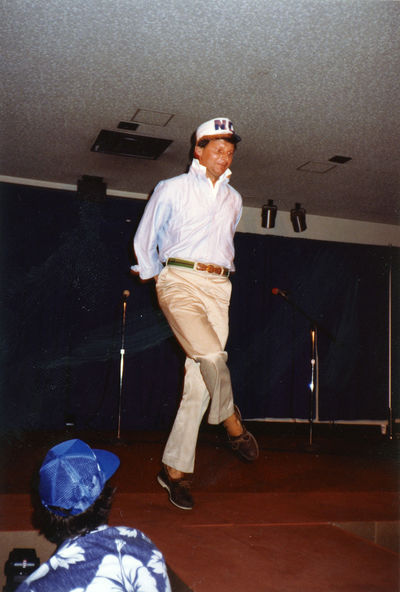 He was a lawyer, a scholar, a teacher, a storyteller, a friend. He was jovial and appreciated fine things like Scotch whiskey and Lacoste golf shirts.

But, first and foremost, McCafferty was a Catholic priest – a devout man who started the tradition of Sunday night liturgies in “the pit” of what is now the Kresge Law Library basement. He also gets credit for the tradition of a Latin-translated diploma and the precursor to what became the Law School’s morning prayer service on commencement weekend.

Many former students recount stories of McCafferty traveling to take part in weddings and funerals. He celebrated both for Tim Rooney ’82 J.D., who lost his mother during his second year at the Law School. Rooney remembers walking into his home church in Illinois and seeing McCafferty at the altar with two other priests from Dillon Hall, where Rooney was a resident assistant.

“I had no idea they were coming,” Rooney said. “As a kid who was not an insider at Notre Dame, to just show up like that unannounced and be part of the whole thing, that probably more than anything else in the history of my life taught me what the Notre Dame idea of community was.”

McCafferty also celebrated the wedding Mass when Rooney married his Law School classmate Kim Ptak in the middle of a snowstorm on January 2, 1982, in Cicero, Illinois. Rooney joked that McCafferty shows up in more of the wedding photos than he does as the groom.

McCafferty had a serious side that helped students overcome hardships, too.

He encouraged Walter Brown ’85 J.D. to repair his relationship with his father. “I did, and it’s something I’m forever grateful for,” Brown said. “It took someone else to be able to focus on that, and that was Father Mike.”

When Brown was on campus in May for his daughter’s graduation, he took her to visit McCafferty’s gravesite in Holy Cross Cemetery. It was important to him that she know McCafferty’s name.

“There really isn’t a day that goes by that I don’t think of how Father Mike helped guide me to become the person I am,” Brown said. “He brought to me all of the qualities of someone that I would want to emulate in my life.”

Professor Matt Barrett ’82, ’85 J.D. took nine credit hours with McCafferty when he was a student at the Law School, and he recalls learning even more from the priest outside the classroom.

Today, Barrett has a letter from McCafferty framed in his office in Eck Hall of Law to remind him of the man who taught him not just about the law, but also about morality and ethics. Barrett looks at that letter every time he leaves his office to teach a class.

It’s not unusual for McCafferty’s friends and former students to display such mementos. Those small reminders are yet more examples of how he continues to guide and inspire the lives he touched. 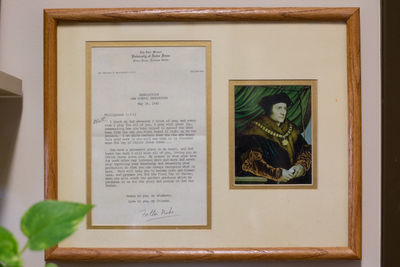 John Gibbons ’85 J.D. keeps a photo of his mother dancing an Irish jig with McCafferty. She passed away a year before McCafferty did, so Gibbons cherishes the image of their faces smiling out from the frame.

In his office, Gibbons also keeps a small framed picture of St. Thomas More that McCafferty gave him at graduation.

“I put that next to my door because I always want to be reminded of doing the right thing in the practice of law, based on the moral, theological jurisprudence,” Gibbons said. “It underpins how we approach all of the issues we confront as lawyers, which was driven home by Father Mike. I never come close to making a decision that would offend that picture or Father Mike.”

Several remembrances can also be found in the Law School in plaques and stained-glass windows dedicated to McCafferty’s memory.

But his most profound legacy will continue to be the Law School’s graduates, even those who never knew him.

As Brown said, “The legacy Father Mike leaves is that the generation of students who walk around with his imprint on their lives will carry that on to others.” 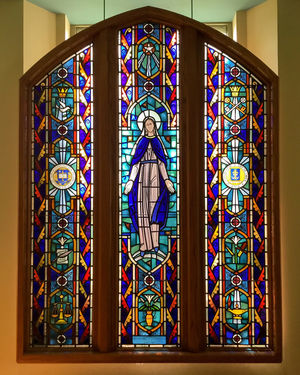 Stained-glass windows displayed in St. Thomas More Chapel and next to the stairway to Eck Commons (pictured) were donated in his honor. There are also two plaques – one in the Eck Commons stairway and one outside under the statue of St. Thomas More – that commemorate his contributions to the Law School’s community and traditions.

Brian Short ’72, ’75 J.D., who was friends with McCafferty, made a generous gift to the Law School in 2013 to support the McCafferty Fellowship and provide for the restoration of the stained-glass window next to the Eck Commons stairway.

“Mike was great one-on-100, but he was also great one-on-one,” Short said. “Maybe that’s one of the reasons why his personal legacy has lasted as long as it has. He was a great man, a great person, and a great friend.”

Rev. Michael D. McCafferty was like the hub of the wheel for the Law School community. People flocked to him and became like spokes in the wheel, connected by Father Mike at the hub.

The McCafferty Fellowship is one of the many ways Notre Dame Law School continues to honor McCafferty’s legacy. The three-year fellowship, which significantly defrays the cost of tuition, is awarded to one incoming student who has the potential to be a hub that connects people as McCafferty did.

“It changed my career and my life,” Drey said. “It was an amazing gift – it was quite humbling to be awarded the first Father Mike award. It shows that the benefactors truly make a difference in people’s lives.”

Drey said Father Mike was a “superhero” in his eyes, especially during his undergraduate years as a resident of Dillon Hall, which was also McCafferty’s home on campus. “There’s an example of what a Notre Dame person is – it’s him,” Drey said. “Father Mike reminds me of the type of lawyer you want to be and should be.”

If you would like to donate to the fund, send checks or make online donations to the Law School with a memo line note of “McCafferty Fellowship.” For questions or assistance, contact Theresa Fry at tfry@nd.edu or 574-631-7609.