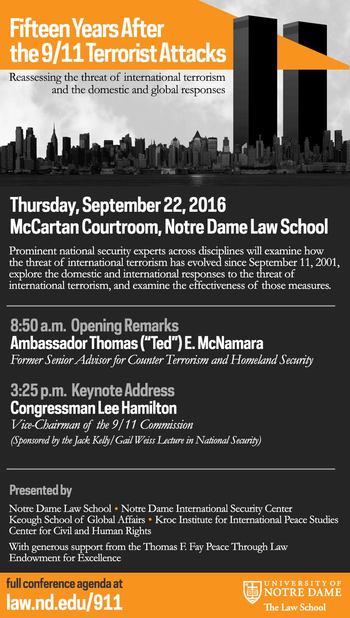 On Thursday, Sept. 22, Notre Dame Law School, in conjunction with the Keough School of Global Affairs, Kroc Institute for International Peace Studies, Center for Civil and Human Rights, and Notre Dame International Security Center, is hosting a conference titled: “Fifteen Years After the 9/11 Terrorist Attacks: Reassessing the Nature of the Threat of International Terrorism and the Domestic and Global Response.”

The conference is intended to commemorate the 15-year anniversary of the 9/11 terrorist attacks that took the lives of approximately 3,000 innocent people.

“Most law school and undergraduate students were children on Sept. 11, 2001, and have a limited understanding and appreciation of the geopolitical impact of the terror attacks,” said Jimmy Gurulé, Notre Dame professor of law and organizer of the event. “The conference will provide a forum to educate these students on important national security, civil liberties, and domestic and foreign policy issues implicated by the tragic events.”

The event will begin with opening remarks from Ambassador Ted McNamara, former senior advisor for Counter Terrorism and Homeland Security to the Secretary of State (2001 – 2004) and feature a keynote address by Congressman Lee Hamilton, Vice-Chairman of the 9/11 Commission.