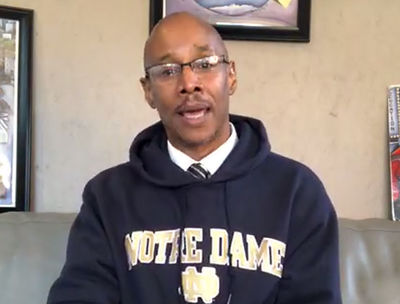 Patrick Pursley spent two decades in prison for a murder he did not commit, receiving his exoneration in 2019. While proving his innocence, he also changed Illinois law. Pursley was recently invited by the Klau Center for Civil and Human Rights to address law students via Zoom along with a member of his defense team, Notre Dame Law School graduate Kevin Murphy ’14 J.D.

In April 1993, a member of the Rockford, Illinois, fire department was murdered in his car during an attempted robbery. With intense political pressure to solve the crime looming, police accepted information from a paid informant that implicated Patrick Pursley. While no blood, fingerprint, or DNA evidence tied him to the crime scene, Pursley was charged with the murder. Central to their case, the state sought to prove that a gun from his home matched bullets found at the crime scene.

Solely on flawed testimony from the state’s ballistic expert, Pursley was convicted of the murder and sentenced to life in prison. Inconsistencies in the testimony were apparent even to the trial judge; declining to sentence him to death because of them, the judge nevertheless ordered him held in captivity for the remainder of his life.

“I’m a statistic. I was the poster child for mass incarceration from the time I was 14 ... but I was also a father, and I was also trying to start my own business. I was trying to find a path out.”

Pursley explained that at the time of the crime, he was in a vulnerable position. “I’m a statistic,” he told students. “I was the poster child for mass incarceration from the time I was 14 ... but I was also a father, and I was also trying to start my own business. I was trying to find a path out.”

From his precarious position in Stateville Correctional Center, Pursley began building a defense. He worked in the facility’s law library, in time becoming a jailhouse lawyer. A grant allowed for correspondence classes to become a certified paralegal.

In 2001 — seven years after his incarceration — Pursley read about a new integrated ballistic identification system. Illinois state police were set to start using this algorithm to connect crime scene ballistics. “I knew immediately that was my ticket,” Pursley said. With more accurate ballistics testing now available, he had the means to prove that his gun was not the murder weapon.

Illinois law, however, did not allow for re-examination of ballistic evidence with new technology. Pursley began a barrage of correspondence with lawmakers, urging them to allow for a change in the law. In 2007, the idea was finally taken up by legislators and written into state code.

When new testing revealed no match between Pursley’s gun and the bullets retrieved from the crime scene, he was awarded a new trial. Just days before the retrial, it was also revealed that, because state investigators could find no gun at the crime scene, they had simply placed Pursley’s gun into the collected evidence. In 2019, Pursley was exonerated. He had spent 23 years of his life imprisoned for a crime he did not commit.

Representation for the vulnerable

Following Pursley’s story, defense attorney Kevin Murphy made a plea to the students to remember the need for strong legal representation for those who are most at risk for wrongful conviction. “The problem of hunger isn’t one of a food shortage, it’s a problem of the distribution. It’s the same thing with legal services,” Murphy said. “There are lawyers providing legal services, it’s just a question of people having the willingness and the distribution networks to get those services to people in prison, and people who are poor.”

Originally published by Kevin Fye at klau.nd.edu on November 16, 2020.