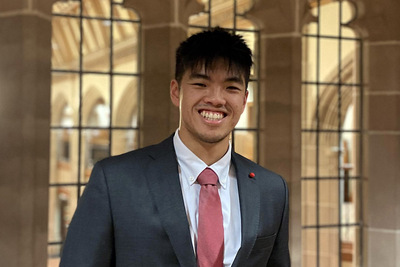 Second-year law student Dillon Yang has been elected president of the National Asian Pacific American Law Student Association (NAPALSA). He is the first Notre Dame Law student to hold the position of president at the national level.

Yang will represent NAPALSA in the greater legal community, working to ensure positive and open communication with the Asian Pacific American Law Student Association (APALSA) chapters around the nation. He will also preside over NAPALSA board meetings and ensure that the board of directors fulfills its governance responsibilities and complies with applicable rules and bylaws.

“The pandemic has been especially devastating for Asian and Pacific Americans. Hate crimes against Asian and Pacific Americans have increased at dramatic rates around the nation. This community is also severely underrepresented in the legal field, making up only 2% of attorneys nationwide. These circumstances have fueled me to use my voice to advocate for my community, and to lead in this capacity with NAPALSA,” Yang said. “I am honored that the board trusted me to lead this organization, and I am excited to advocate for the Asian American Pacific Islander community on a much larger scale. There is a lot of work to be done, and I cannot wait to get started.”

Current NAPALSA president Adrian Lee, a student at the George Washington University Law School, connected with Yang last fall and urged him to run for president.

“I am excited for Dillon to be the next president of NAPALSA,” Lee said. “His plan to strengthen the Asian American Native Hawaiian and Pacific Islanders law student community through more professional development opportunities gives me confidence that Dillon will do an amazing job in his role. NAPALSA will continue to grow under his leadership, and I look forward to seeing what he and the next board can accomplish.”

At Notre Dame, Yang serves as president of the Law School’s Asian Pacific American Law Student Association. He is also a staff editor on the Notre Dame Journal of Legislation, a class representative for the Student Bar Association, and an assistant rector in O’Neill Family Hall.

“Dillon is the first member of the Notre Dame Law School community to be elected president of NAPALSA — an organization in its 41st year. To say we are proud of him is an understatement,” said Max Gaston, ND Law’s director of diversity, equity, and inclusion. “Dillon’s dedication to supporting the AAPI community, his strength as a culturally competent listener and leader, and his unique ability to unite people make him an example of what it means to be ‘a different kind of lawyer,’ and an ideal fit to hold the office of NAPALSA president.”