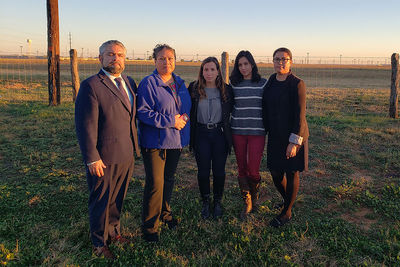 For the second year in a row, Rudy Monterrosa ’01 J.D., an immigration attorney and adjunct professor at Notre Dame Law School, traveled to Texas for four days during winter break to provide legal assistance to immigrant women and their children who are seeking asylum in the United States.

Working with the Dilley Pro Bono Project, a program run under the umbrella of the Immigration Justice Campaign, Monterrosa and others in the group, including third-year law student Grace Nickels, met with women at the South Texas Family Residential Center, the largest immigrant detention center in the United States.

Similar to last year, the group helped women prepare for credible fear interviews and immigration court during their process of applying for asylum. The interview is the first step in the asylum process.

Changes in the federal government’s policies regarding immigration this year have led to fewer women being approved for asylum and many have had their cases denied. Monterrosa’s group helped women prepare for a de novo judicial review with an immigration judge.

“The trip this year was even more heart-breaking,” said Monterrosa. “Our team was able to provide much-needed assistance with the expert guidance of the Dilley staff. My wife and I, as the only lawyers in this particular group of volunteers, were especially humbled to be able to convince the immigration judge to overturn the negative findings from the asylum officers, highlighting issues in the original interviews and securing release for these deserving women.”

In one instance, Nickels noticed inconsistencies in the record of one client and was able to speak to the client to help her present a more favorable case.

“It was a moving experience to meet these women and their children firsthand — to hear their stories and the struggles they overcame,” said Nickels. “The number of immigrants being approved for asylum has dropped significantly, leaving families torn apart and in danger. The women I met showed courage in the face of violence and persecution. I laughed and cried with these women and learned as much from them as I hope they did from me.”