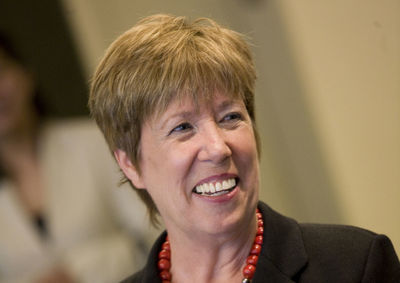 Joseph A. Matson Dean and Professor of Law Nell Jessup Newton will conclude her tenure as dean of Notre Dame Law School on June 30, 2019, after 10 years of service to the Law School and the broader University. The University is currently conducting a search for the Law School’s next dean.

Newton assumed the deanship at an important time for the Law School, in the midst of a recession that resulted in diminishing job prospects for all law school graduates across the country and a concomitant serious downturn in applications to law schools. Despite these challenges, Notre Dame Law School is thriving, and continues to attract outstanding students and faculty. Twenty of the current full-time Notre Dame Law faculty joined the Law School during Newton’s deanship, including four in 2018-2019. The current faculty hiring plan anticipates eight additional faculty hires in the coming years. Throughout her deanship, Newton provided extensive support for scholarship and helped raise the scholarly profile of the Law School by supporting the creation of research programs on Church, State, and Society; Constitutional Structure; Law and Economics; and Law and Market Behavior. Most recently, the Law School has become an integral part of the University’s Real Estate Institute.

Newton’s concern for students has been a hallmark of her tenure. She expanded the Career Development Office, created a new position for a wellness counselor for students, and significantly upgraded the school’s Loan Repayment Assistance Program for graduates in public service. To date, that program has grown 500 percent during her tenure. To further encourage student interest in public interest careers, she created the Thomas L. Shaffer Public Interest Fellowship and the Bank of America Foundation Community Sustainability Fellowship, each of which annually awards two Notre Dame Law students a two-year post-graduate fellowship with a governmental agency or private nonprofit. To guide student course selection, the faculty also created eight curricular programs of study.

Under her leadership, the Law School built on its existing strengths in public law, with outstanding faculty hires and the addition of the O’Toole Chair in Constitutional Law. She oversaw the expansion of the curriculum in intellectual property and technology law. Notre Dame was one of the first schools to offer a course on the impact of technology on law practice (Law 2.0) and an early creator of a clinic in Intellectual Property and Entrepreneurship. International programs also flourished. The London Program has been reinvigorated, the LL.M. in human rights law has been expanded and strengthened, and the Law School now has student exchange programs in China, Chile, Italy, Ireland, and Switzerland. The LL.M. program for foreign lawyers and judges now enrolls students in South Bend as well as London and includes an option to spend one semester in each location.

Having inherited a new facility, Eck Hall of Law, which was dedicated in 2009, and a completely renovated original Law School building, now known as Biolchini Hall of Law, Newton was able to focus her fundraising for other programs benefiting students and faculty. Under her leadership, the Law School raised more than $85 million and it expects the total to be close to $100 million by the end of her tenure in June 2019.

Newton continued to teach while she was dean, offering the 1L course in contract law twice, and more recently supervising and teaching in the D.C. semester externship program. She plans to return to the classroom full time after stepping down and to continue her role as editor-in-chief of Cohen’s Handbook of Federal Indian Law.

"I have had the privilege of working with a superb faculty and staff and of helping to form a generation of lawyers who have gone on to make important contributions to the greater good," she said. "Now it is important to make room for the next generation of leaders, and I am excited about the future for the Law School I have come to love so much."