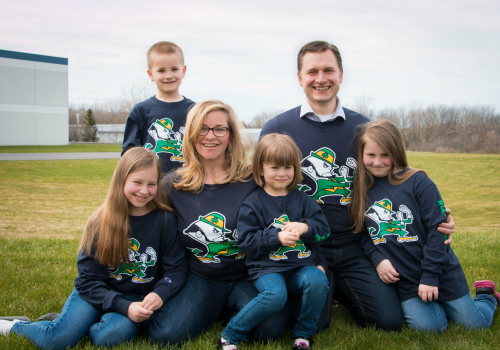 Corey Hemmerich, 2L, and her husband, Chris, with their four children.

When Supreme Court Justice Ruth Bader Ginsburg spoke at the University of Notre Dame in September 2016, one of the many points she touched upon was how she balanced being a mother at the same time she was in law school.

Ginsburg told the audience in Purcell Pavilion that caring for her young daughter, Jane, gave her “a sense of proportion” as a law student.

“For me, there was more to life than just attending law school classes,” Ginsburg said. “I attribute my success in law school, in large measure, to two people: my spouse and baby Jane.”

Those words resonated with Corey Hemmerich, a mother of four who was just a few weeks into her first year at Notre Dame Law School.

“It was so meaningful to hear that from someone who has been so successful,” Hemmerich said of Ginsburg.

She decided to stay home with her kids until they were old enough to go to school.

Then she went back to school.

“There’s nothing wrong with a mother’s choice to stay home with her children, but I wanted my daughters to know that’s not their only choice,” Hemmerich said. “My children help me remember why I’m doing this. I’m working for more than just a grade in a class.”

Hemmerich also realizes that being a mother helped prepare her for the intensity of law school. She worked as a freelance writer while at home with the kids.

In addition to being a mother of four, Hemmerich is an “extreme commuter.”

She lives near Grand Rapids, Mich. – about 100 miles from Notre Dame. She said her husband has stepped up at home to help her juggle law school, the driving, and family responsibilities.

“My husband is unbelievable. I’ve basically stopped doing housework,” she said. “He’s doing all the cooking, all the grocery shopping, the cleaning. Those were the things I did for 10 years. And he hasn’t complained once.”

Hemmerich chose Notre Dame because of the Law School’s warmth and collegiality, and because she wanted to be associated with the Notre Dame ethic and be part of the alumni network. As someone who wants to use the law to help and protect people, she also identified with the “Different Kind of Lawyer” motto.

“Catholic values overlap with my values, even though I’m not Catholic,” she said. “Those values – respecting people, caring for people – make it a safe space for everyone.”

This summer, Hemmerich is working as a research assistant to Professor John Nagle, who is writing a book about national parks.

“Corey has done a terrific job researching some very different types of legal questions,” Nagle said. “She has collected a host of material exploring how Zion National Park should address its overcrowding problem, and she has analyzed every article of impeachment ever approved by the House of Representatives in American history.

“And,” he added, “her daughters help her by color-coding the materials for me.”