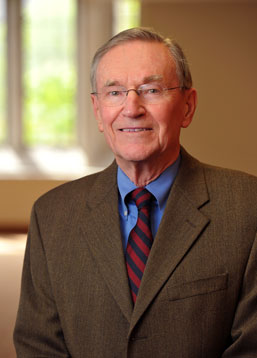 The American Academy in Berlin, Germany’s Wissenschaftskolleg (Institute for Advanced Study), and other prestigious scholarly institutions in Germany recently hosted a symposium in honor of Donald P. Kommers, Joseph and Elizabeth Robbie Professor of Political Science and professor of law emeritus at the University of Notre Dame.

The symposium, entitled "The Curious Life of the Grundgesetz (German constitution) in America," was held in Berlin. The event celebrated Kommers’ extraordinary body of work in German constitutional scholarship during the year of his 80th birthday.

“I was a little uncomfortable through the whole thing because I had never had so much attention directed at myself,” Kommers said, adding that it was humbling to be so honored.

This was not the first time Germany has paid tribute to Kommers and his scholarship. In 2010, the German government presented him with the Distinguished Service Cross of the Order of Merit of the Federal Republic of Germany for having “remarkably enriched both the American and German legal systems and building a bridge between our countries as few others have.”

And a few years ago, when the country sought to commission a new official translation of its constitution, Basic Law for the Federal Republic of Germany, it was Kommers who got the call.

Over the past five decades, he has written scores of articles and 10 major books, one of which has had a tremendous impact on the popularity of German constitutional scholarship in America — the acclaimed Constitutional Jurisprudence of the Federal Republic of Germany. A third edition was released in October by Duke University Press.

“Since the late 1960s, Germany’s Constitution and its Federal Constitutional Court have replaced the U.S. Supreme Court and our Constitution as the leading models of constitutional governance around the world,” Kommers said. “I’ve been told that my book helped to highlight among English-speaking lawyers and judges the importance and relevance of Germany’s constitutional jurisprudence for the interpretation of their respective constitutions.”

Kommers says that it was his early interest in both constitutional studies and German politics that prompted him to compare American and German constitutional case law. He credits Notre Dame with stimulating this interest when, in 1968, the Western European Studies Program helped to finance the year he spent as a research guest in Germany’s Federal Constitutional Court.

“Our Constitution is really one of liberty: we place an emphasis on liberty, and particularly free speech,” he said. “In Germany, it’s very different; theirs is a constitution of dignity. The very first article of the constitution says that human dignity shall be inviolable; to respect and protect it will be the duty of all state authorities.”

Today, Kommers is working on his next book, Germany’s Constitutional Odyssey.

“This is an attempt on my part to assess the influence of Germany’s Basic Law on the development of German constitutionalism and democracy over the last 60 years,” he said. “I try to show the extent to which the values displayed in the Basic Law have been absorbed by the German people.”

“I think Germany today is one of the most durable and advanced constitutional democracies in the world.”