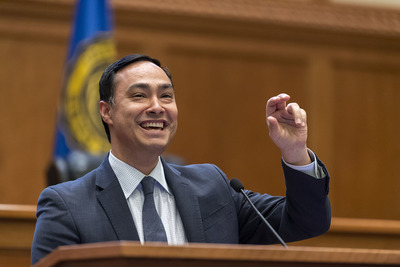 The Hispanic Law Student Association at Notre Dame Law School honored Congressman Joaquin Castro on Thursday, April 25, with the 2019 Graciela Olivárez Award. The award is named in honor of Olivárez, who was the first woman and first Latina to graduate from Notre Dame Law School.

Notre Dame Law School’s HLSA chapter presents the Graciela Olivárez Award each year to an outstanding Hispanic lawyer or judge who exemplifies Olivárez’s ideals such as a strong commitment to community service, high ethical and moral standards, and a dedication to justice.

Affectionately known as “Amazing Grace,” Olivárez advocated for the poor, homeless, and underprivileged throughout her life. She worked as an attorney, public servant, and civil rights activist. She served under three U.S. presidents, including President Jimmy Carter, who appointed her director of the Community Services Administration in 1977. 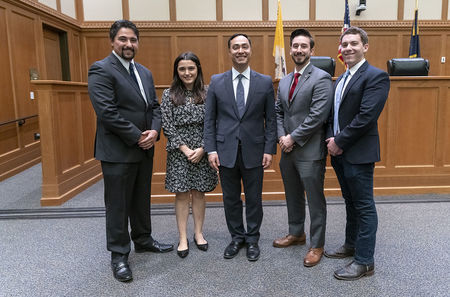 Peter Gonzales, a third-year law student and president of Notre Dame Law School’s HLSA chapter, said Castro’s commitment to the Latino community is one of the reasons that HLSA chose the congressman to receive this year’s Graciela Olivárez Award. Castro has served Texas’s 20th Congressional District in the U.S. House of Representatives since 2013 and chairs the Congressional Hispanic Caucus.

Castro spoke to Notre Dame Law students at a ceremony in the Patrick F. McCartan Courtroom. He reflected on the advances Latinos have made in recent years, including growing Latino communities throughout the country, more Latino representation in government, entrepreneurship, and professional careers, and an increased number of Latinos attending college and earning advanced degrees.

He also cited the challenging environment for Latinos today, especially with the politics surrounding immigrant and migrant issues.

Castro said it was his mom’s fire for politics and determination through public service that made him realize at a young age that you can make a difference in people’s lives.

“Through my parents, especially my mom, I developed a civic conscience that government matters and that when it works right it can help create opportunity for people. And it can also right injustices,” Castro said. 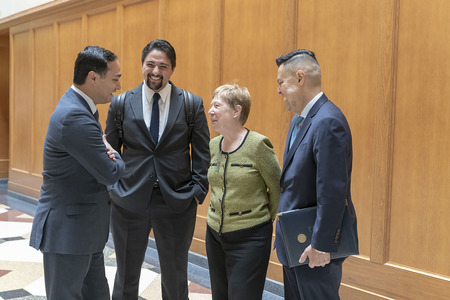 He challenged the students to help ensure that the country lives up to its founding promises like Olivárez did in her work — through their careers, through whatever type of law they practice, or through volunteering.

“Graciela did this in her own generation. It is now this generation’s turn to stand up for vulnerable people and communities,” Castro said. “We have to remember our national character, that this is a nation of immigrants. Just because you cross a border does not make you less human. This country is seen as a place of refuge, and opportunity, more than any other country.”

He reminded students, as they reach milestones in their lives, to think of the people who helped them get where they are, who laid a foundation and made sacrifices for them, and to seize the opportunities made possible by those sacrifices. Castro ultimately credits his grandmother, who came to United States from Mexico in 1922, for the opportunities given to him.

The ceremony was sponsored by HLSA, the American Constitution Society, and the Institute for Latino Studies at the University of Notre Dame.

See past recipients of the Graciela Olivárez Award.