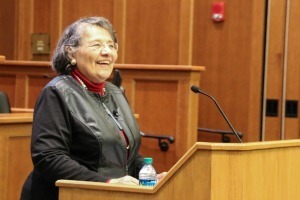 No word in the English language could describe the energy that powered the civil rights movement of the 1960s.

So, Diane Nash made up a new word.

Using the Greek word agape – which means love for humankind – Nash coined “agapic energy” to encapsulate the driving force behind the nonviolent movement that she helped lead.

“We needed a term that encompassed much more than simply the absence of violence,” Nash said Tuesday while speaking at Notre Dame Law School. “Nonviolence is a negative term, and what we were talking about was a very positive and a very comprehensive phenomenon.”

Nash’s speech in front of a capacity crowd in the Patrick F. McCartan Courtroom in the Eck Hall of Law was the Inaugural Dean’s Lecture on Race, Law, and Society.

Nash, a founding member of the Student Nonviolent Coordinating Committee, was a leader and strategist in several campaigns that brought landmark civil rights victories.

She was arrested and jailed in 1960 for participating in sit-ins at segregated lunch counters in Nashville, Tenn. She was on the front lines of the Freedom Rides to force desegregation on public transportation in the South. And she played a key role in shaping the Selma right-to-vote movement, which eventually led to the Voting Rights Act of 1965.

On Tuesday, she talked about the philosophy and strategy involved in the civil rights movement and how the principles of agapic energy remain relevant today.

“The first principle is: People are never your enemy,” Nash said.

“If you recognize that people are not the enemy,” she said, “you can love and respect the person at the same time you attack the attitude or action of that person.”

Nash recounted how the manager of one of Nashville’s segregated restaurants initially opposed the movement to desegregate the city’s lunch counters but later became an ally. He took it upon himself during the campaign’s second year, she said, to talk to owners and managers at other restaurants about how his business had not suffered from desegregation.

“Wouldn’t it have been a shame if we had killed or injured him, thinking that he was the enemy? It was not the person who was the enemy. It was his racism,” Nash said.

“One of the problems with using violence to bring about social change,” she said, “is that you often kill individuals and leave the oppressive system, or the real problem, untouched.”

The second principle of agapic energy, Nash said, is that “oppression always requires the cooperation of the oppressed.”

She pointed to the Montgomery bus boycott as an example. For decades, she said, black people in Montgomery, Ala., boarded buses, paid the fare, and walked to the segregated section.

“When the oppressed withdrew their participation from the oppressive system, the system fell,” she said.

“The only person you can change is yourself. When you change yourself, the world has to fit up against the new you,” she said. “We changed ourselves into people who could not be segregated, and that presented a new set of options to Southern white racists. They had to either shoot us or desegregate, because they could not any longer segregate us.”

Agapic energy remains applicable to today’s issues, Nash said, and Americans need to put it into action if they want to see change. Voting is important, she said, but it’s not enough.

“Can you imagine if we had waited for elected officials to desegregate lunch counters and buses, and get the right to vote for blacks in the South? We probably would still be waiting,” she said.

Every generation faces its own challenges, Nash said.

“Freedom is not something you get and then you’ve got it,” she said. “Freedom is a constant, never-ending struggle.”

Nash and her contemporaries understood that in the 1960s, too.

There were many times, she said, when the civil rights activists knew that continuing to march could lead to someone being killed or injured. She remembers some people bursting into tears because they were so afraid.

But their actions were not for themselves.

“I’d like for you to know that, although we had not yet met you, we loved you. And we were trying to bring about the best society we could – for you to be born into and for you to come of age in,” Nash said. “Future generations will look to you to do the same for them.”

Nash’s speech was presented by the Law School, the Center for Civil and Human Rights, and the Office of the President with support from the Department of Africana Studies.