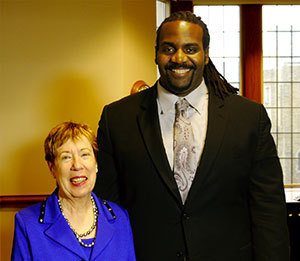 Dean Nell Jessup Newton has announced that the Peter Lardy Memorial Fellowship for the 2014-2015 academic year has been awarded to 2L Christopher Stewart. Stewart’s name will now be added to the Lardy Fellowship plaque’s list of recipients, which includes 2013-2014 Fellow Armando Cordoves and extends back to the first recipient, John F. Ready, in 1976.

Dedicated by the Class of 1975 to the memory of Peter A.R. Lardy and “those who exemplify his Courage, Love, and Understanding toward his fellow man,” the fellowship includes a substantial tuition remission for the recipient’s third year of law school.

Stewart hails from Houston, Texas. He graduated in 2009 with a degree in History and International Peace Studies from the University of Notre Dame, where he was a starting offensive lineman for the Notre Dame football team. Stewart continued his football career after graduation, retaining his position at right guard while completing his fifth year of eligibility as a fulltime 1L law student. His post-graduation plans include pursuing judicial clerkship and private practice opportunities.

Peter A.R. Lardy, Class of 1975, died from cancer during his third year of law school and was loved by his classmates. Those who knew him recall his professional qualities, generosity, deep faith, and quiet cheerfulness and good humor in the face of adversity. He was “a born lawyer, a warm friend, and a great human being.” Peter’s classmates established and funded the Lardy Memorial Scholarship in his honor to recognize a current second-year law student possessed of these same qualities.