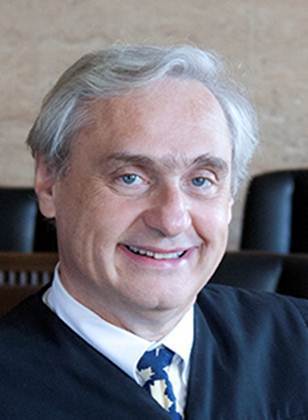 Chief Judge Alex Kozinski of the U.S. Court of Appeals for the Ninth Circuit visited the Law School October 15-16 to speak with students and faculty.

On Tuesday, students and faculty welcomed the judge with a reception in the Commons.

On Wednesday, Professor (and former Kozinski law clerk) Jennifer Mason McAward joined the judge for a public conversation at an event sponsored by the Federalist Society.

An influential jurist in IP law, Judge Kozinski was appointed to the Ninth Circuit in 1985 at the age of 35. He received both his bachelor’s and law degrees from UCLA. Prior to his appointment to the appellate bench, Judge Kozinski served as Chief Judge of the United States Claims Court, worked in public and private practice, and served as Law Clerk to Chief Justice Warren E. Burger and then-Circuit Judge Anthony M. Kennedy.