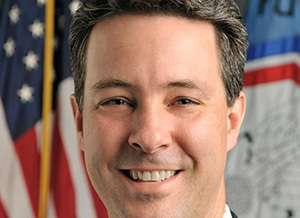 Commissioner Scott O’Malia of the United States Commodity Futures Trading Commission visited Notre Dame Law School September 21 to address the Business Law Forum. He highlighted his concerns that in an effort to implement the Dodd-Frank Act of 2010 quickly, the CFTC is reaching beyond its authority in some instances.

After citing examples (transcript [pdf]) he called upon the CFTC to apply principles of good government in fulfilling its mission – in particular, by adopting rules that are clear, consistent, and that create a level playing field; by providing transparent implementation guidance that is consistent with final rules; and by remaining cognizant of the impact of Commission regulations on market activity and being willing to reassess where appropriate.

“I appreciate Notre Dame’s consistent focus on studying the important interaction between business and the legal system,” O’Malia said. “Both the Law School and Business Schools have joined this debate.”

A Commissioner of the CFTC since 2009, O’Malia has been an advocate for greater use of technology to more effectively meet the CFTC’s responsibilities in surveillance, oversight, and regulation of the futures and swaps markets. He chairs the Technology Advisory Committee, which is drafting a definition of high frequency trading and studying its impact on the financial markets. Commissioner O’Malia has been a critic of “high frequency regulation” – adopting regulations without sufficient cost-benefit analysis. A native of South Bend, Commissioner O’Malia was raised on a family farm in Michigan and graduated from the University of Michigan.