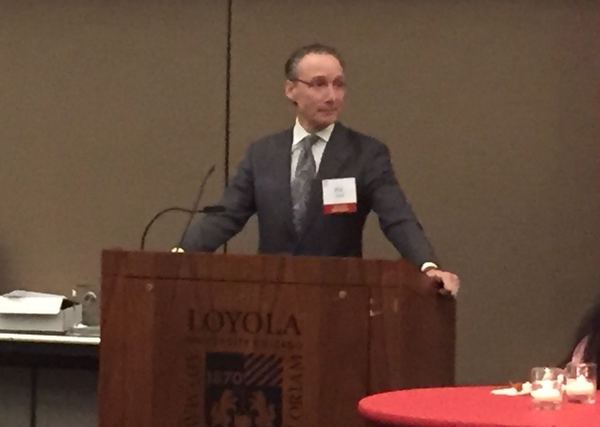 Patrick A. Salvi speaks Oct. 3 at Loyola University Chicago, where the Catholic Lawyers Guild of Chicago honored him with its Lifetime Achievement Award.

The Catholic Lawyers Guild of Chicago honored Patrick A. Salvi, ’78 J.D., this week with its Lifetime Achievement Award. The award is presented annually to an individual who has demonstrated a lifelong commitment to the Church and the bar.

“I am honored and humbled to receive this prestigious award from an organization that is very dear to my heart,” Salvi said. “As a recipient of the Lifetime Achievement award, I look forward to carrying on the legacy of the Catholic Lawyers Guild of Chicago in my practice.”

Salvi is managing equity partner at Salvi, Schostok & Pritchard. He concentrates his legal practice on cases involving serious personal injury, medical malpractice, and wrongful death. Under his leadership, the firm has obtained verdicts and settlements totaling more than $1.2 billion on behalf of clients.

Salvi, Schostok & Pritchard set a new record in August when it won a $148 million jury verdict for a Chicago-area woman who was partially paralyzed when a bus shelter at O’Hare International Airport collapsed on her during a storm. The verdict was the largest ever handed down in a Cook County personal injury case.

Patrick A. Salvi and Patrick A. Salvi II also were honored this summer when the father-son pair were both named to the Lawdragon 500 Leading Lawyers in America for 2017.

“The main part of my legal practice that I find most satisfying is that we have an opportunity to help people in some of their most desperate times, after they have suffered a terrible injury or the loss of a loved one,” Patrick A. Salvi told Lawdragon in July. “We have the ability to relieve the financial burden that clients would have, and that gives them great comfort.”